This guide will explain the staff attributes in Football Manager.

Just like player profiles, backroom staff profiles are build-up by 'Attributes'. These are important for determining the quality of a coach, scout or physio. You can view the attributes on each staff member's profile screen. In this basic Football Manager Guide we will explain more about these attributes and we will also have a look at the Tendencies.

The attributes that build a staff member's profile are split in to multiple categories and are all rated 1 to 20, with 1 being the lowest and 20 being the highest. Ideally you want your staff members to score as high as possible on their needed attributes.

There are 6 different categories:

The coaching attributes are needed for all backroom staff members who are involved in club and player training. Coaches, Assistant Managers and Managers need these attributes to determine the quality of the training.

The ability of a staff member to coach the defensive side of the game. A higher rating for this attribute does not mean the coach prefers defensive football, merely that he is good at coaching this category.

This attribute determines the staff member's ability to improve and maintain a player's fitness level. A higher rating will ensure that the standards of player and squad fitness are developed and maintained.

This reflects how well a staff member is able to deal with players on a mental level. A high rating will improve a staff member's observation on each individual's state of mind and the ability to react accordingly.

This attribute determines the ability of the staff member to teach the technical side of the game. For example a player's Technique or First Touch.

How well a staff member is able to work with younger players, those aged 18 and under in particular. Having a coach who is very good at nurturing young talent can be priceless if just one or two of them develop into first team players in Football Manager. 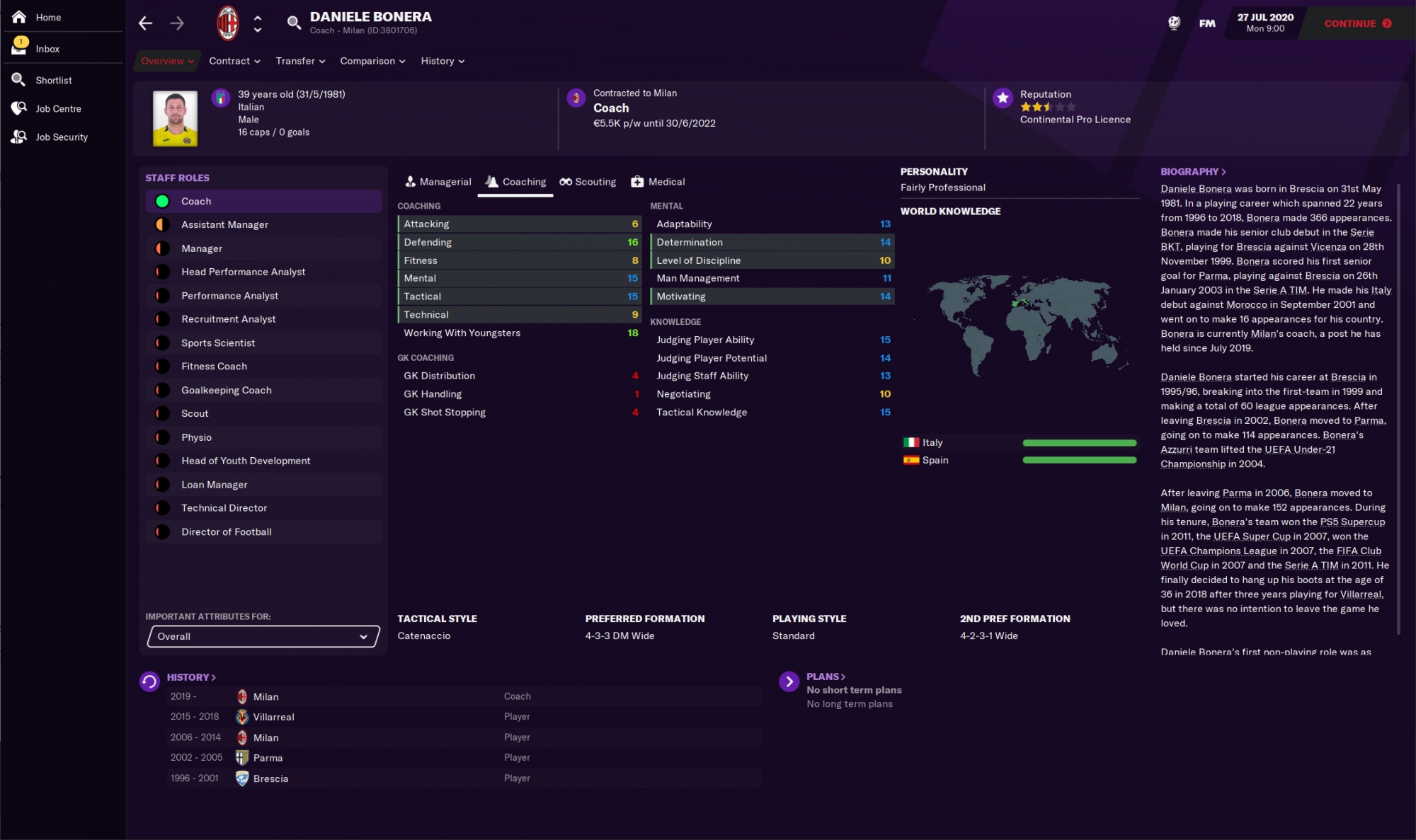 This area has all the key attributes for Goalkeeper coaches.

This attribute determines how good a coach is at improving a goalkeeper's distribution and not improving his technical abilities for Kicking and Throwing. This attribute deals with identifying the right player to distribute to and the method of getting the ball there.

This attribute is needed for a goalkeeping coach to improve the Goalkeeper's handling attribute, as well as impacting upon their Aerial Reach, Command of Area and Communication.

This determines the coaches' ability to improve a goalkeeper's attributes in the Shot Stopping department. A better coach will see improvements in attributes like Reflexes and One On Ones.

The mental desire of a staff member to succeed in his career. This is not an attribute that helps a coach improve a player's mental approach, but rather the staff member's own innate drive to better themselves.

This reflects the amount of discipline the staff member will likely demand in his approach. A higher attribute will mean a coach will be harder on players to keep thing strict, whereas a lower one means they are a little more relaxed.

This attribute shows how well the staff member is able to deal with other staff members and particularly the ones that are below him. Higher ratings are needed to keep people happy at the club.

The ability of a staff member to motivate a player. A higher rating will allow them to suitably prepare the players for a variety of situations. For example, pushing themselves harder in training but also helping an injured player to work harder during his recovery.

These attributes are mainly needed by scouts who look for new players. However, it is also used by your assistant manager to create the ability and potential stars for your own team and also the coach and team reports.

The ability of a staff member to appraise the potential future levels of performance of a given player or team whilst taking into account several factors that could influence the outcome. For example, a player's age, hidden attributes and a player's personality.

The ability of a Technical Director to judge which abilities of staff members need improvement and act on that information.

How good the staff member is at negotiating deals. A non-player involved in transfer or contract negotiations will seek better financial deals if they are a more skilled negotiator, while someone less skilled will be somewhat more likely to agree to less favourable packages.

The tactical knowledge a staff member has. However, this attribute will increase with age as the level is affected by their experience in the game, where they have been and who they have worked with in the past.

These attributes are used by Performance and Recruitment Analysts and the Loan Manager in Football Manager.

The ability of an analyst to understand data concerning an individual player or team and interpret it in a manner useful to the manager.

These attributes are needed by the Physiotherapists and Sports Scientists in Football Manager.

This attribute is needed by Physio's and reflects their ability for their treatment to both prevent and rehabilitate injuries.

The ability of a staff member to accurately manage every player's fitness level and injury risk. This will help the squad to keep their condition to play regular football during a long and busy season. 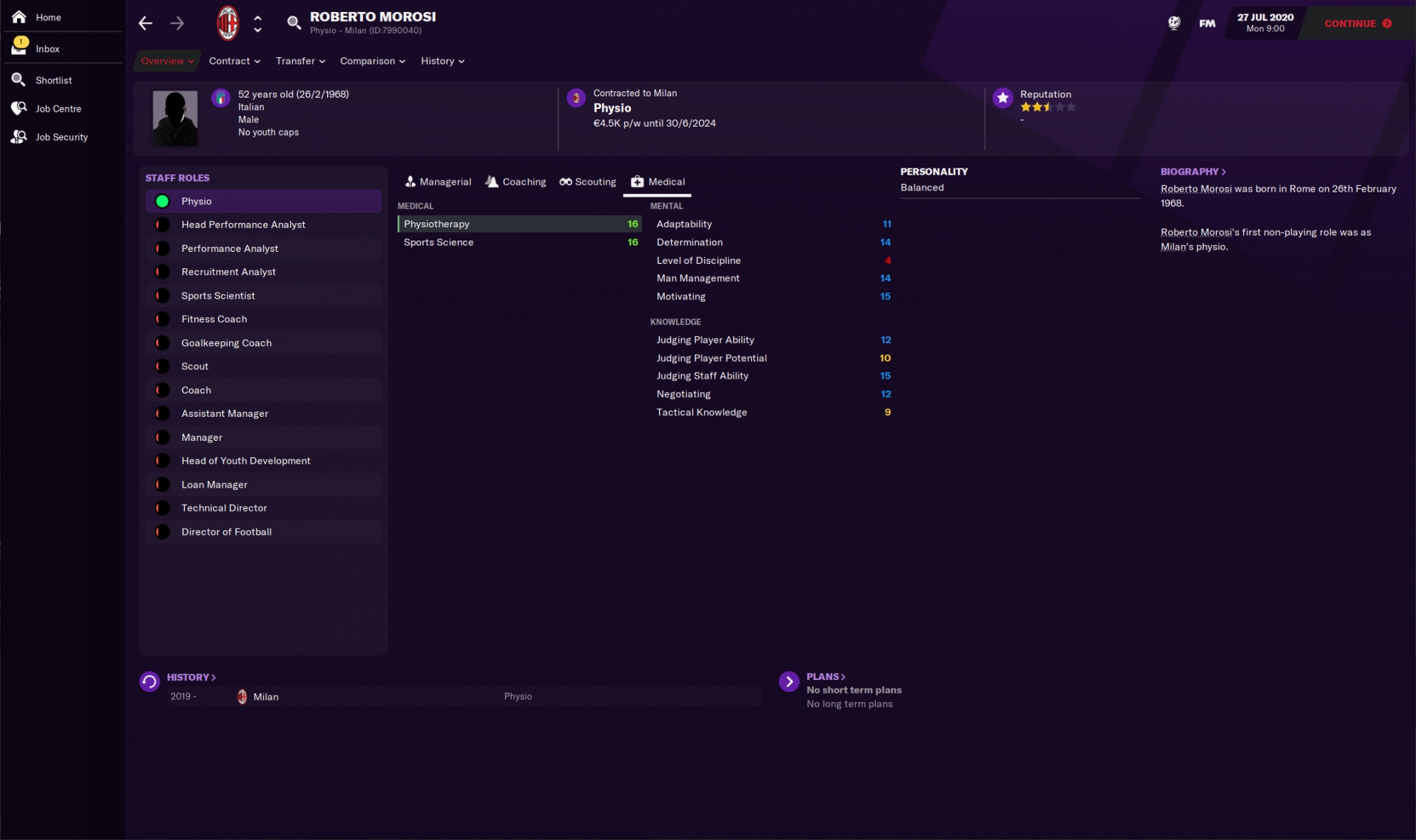 The Tendencies can be divided into two main categories: