Picking your captain in Football Manager

An in-dept look on how to pick your captain in Football Manager.

The captain of a football team is often described as the leader. He will need to rally the troops in difficult times and he needs to stand tall when the situation calls for it.

In Football Manager the captain is an integral part of your football team, but his captaincy doesn’t end after the final whistle blows at a match. A captain is your eyes and ears in the team and he can assist the manager with certain issues on the team both on and off the pitch.

Responsibilities of a captain

His main job is to lead the team. He leads by motivating his fellow players on and off the pitch. Ideally he is considered a role model for the other players and for you he will be the link between you and your players.

The interaction module in Football Manager has been greatly expanded in the past couple of years. Players now come to you with problems or to talk about certain subjects. A few of these conversation types can only be held with your captain and vice-captain.

You can initiate these talks from the profile of a player, using the Interaction drop-down menu, picking Ambassadorial Duties.

Examples of chats with your captain and vice-captain:

Picking the right man for the job isn’t that hard, you just have to know what to look for.

First you should have a look at the Dynamics area. On the overview page you will quickly see if your team has any ‘Top Influencers’. They should be considered as a good pick.

Move down into the Hierarchy tab to get a good and quick overview of the structure of your squad. Who are the team leaders? Who are highly influential and who are ‘other players’, meaning they are in the team but don’t have any real influence. These are mainly new or young players in the squad.

Ideally you want your captain to be in one of the core Hierarchy groups: Team Leader or Highly Influential. 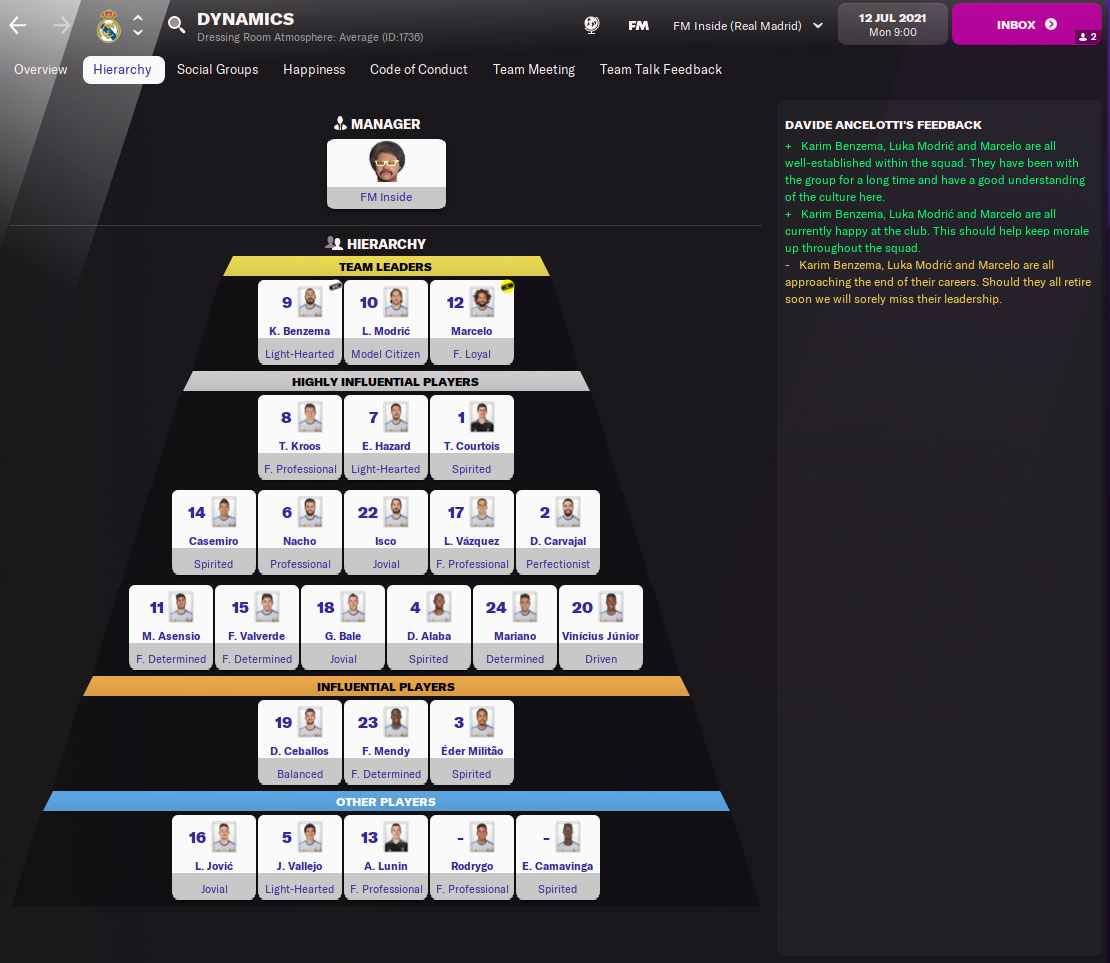 Next place to look is the Social Groups tab. Here you get an overview of the social groups in your team. The social groups are built using players of the same nationality, same personality and players who have been at the club for roughly the same amount.

Ideally the captain should be in one of the core social groups. A bigger social group will have him influence a lot more players. However, this could also backfire massively if you don’t play your cards right. The players in the same social group as your captain could all turn against you if you anger your captain.

After identifying several candidates for the role of captain it is time to look at their attributes.

Head over to the Tactics area and select the Captains Tab. A list will appear, automatically selecting the two most important attributes for a captain:

Leadership
This attribute reflects the player’s ability to influence players around them on the pitch. Team-mates will often rally around them.

Teamwork
This attribute reflects how the player can follow tactical instructions whilst working for and alongside his team-mates.

Besides these two you should look for a player with strong mental attributes, such as: Determination, Decisions, Work Rate and Bravery. 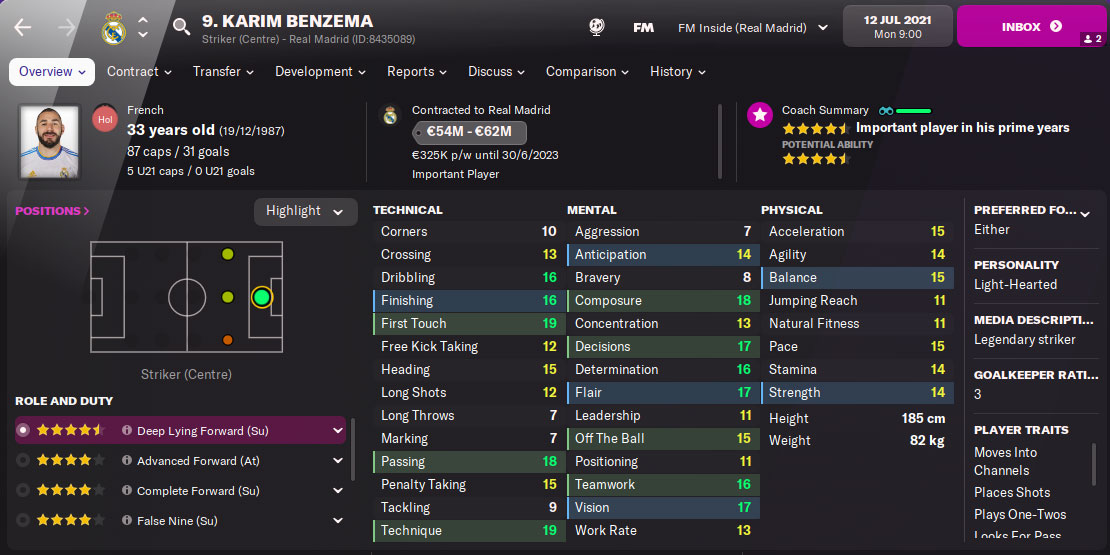 Next thing to check is the personality of the captain. The personality of a player will determine his day-to-day handling. It determines if he works hard in training, never slacks during matches and how he behaves off the pitch.

Because captains are supposed to be one of the more influential players on your team, his personality or some traits of that personality could be inherited by the young players on the team. This is crucial in player development.

While there are several successful examples of young players as captains, most captains are the more mature players in a squad.

This is actually in line with the mental attributes a captain needs. These will develop over the years and with an older player, the chance that his mental toughness is stronger is also a bit higher.

Also his past experience or reputation is considered to be important for a captain. Higher reputation players are more likely to command respect from their teammates.

In addition, an older player is more likely to be among the influential players or the leaders in the team, as we described earlier.

Another good place to get more information on a potential captain candidate is the Coach Report card. The coach will give you some pros and cons, which makes it easy to spot a true captain.

One of the pros you should be looking for is ‘Considered a leader’. This truly is a very big pro for a captain. Another pro could be ‘The fans really like this player’. Making such a player the team captain will improve the support of your fans. 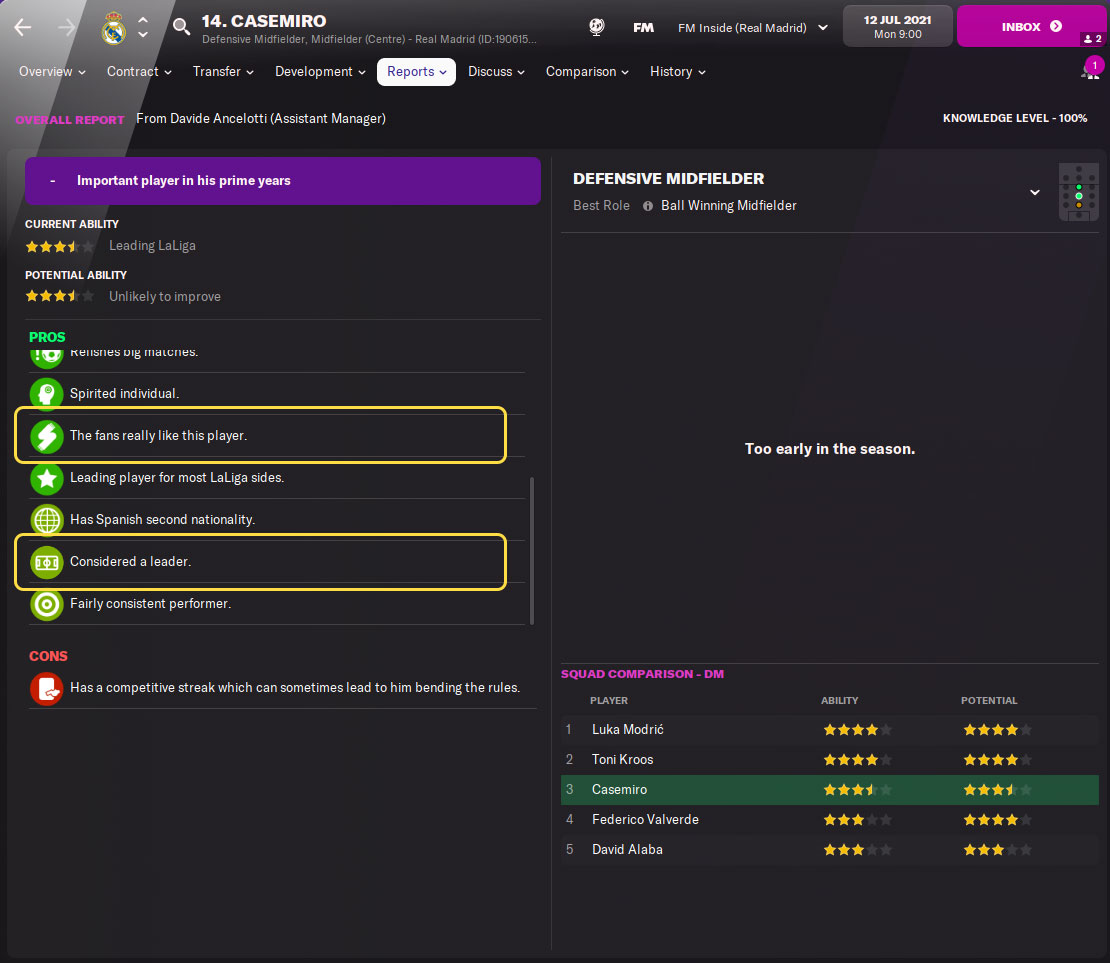 Once you have decided who the best candidate for the role of captain is, you might need to replace your current captain. Be careful with this as this could result in a massive uproar.

Changing captains mid-season without any reason could result in him becoming unhappy. If the player is a team leader and part of a large social group it could lead to more unhappy players in your squad. Losing the command in the dressing room could end up in you losing your job. So be careful.

Therefore we advise you not to change captains in the middle of the season or when you have joined a new club. Squad morale is very important in Football Manager and should be kept high at all times. 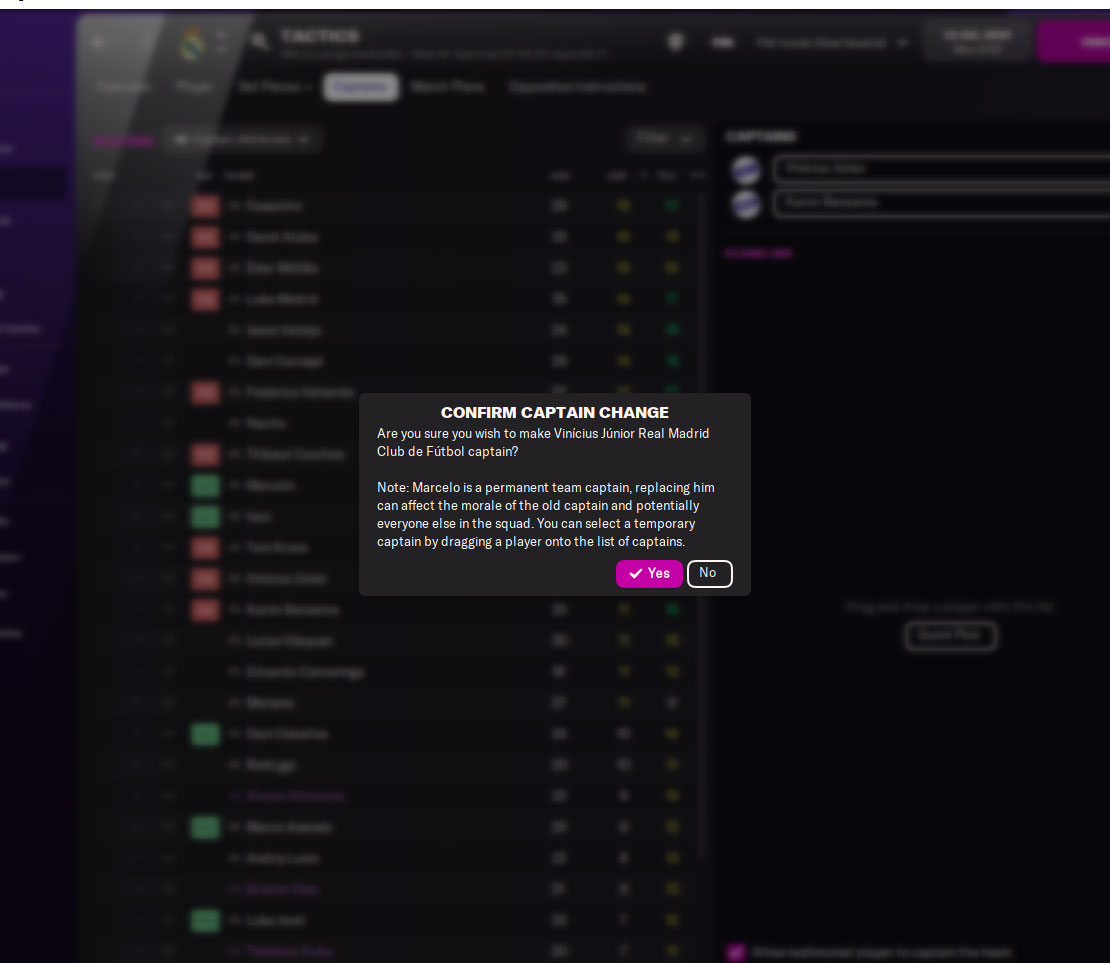 A slower and possibly better way to change things around is by replacing the vice-captain first. This could still result in an uproar but will be on a smaller scale than replacing the captain.

PIck the player you would like to be your captain in the future and make him the vice-captain of the team. When the time is right you can promote him to the role of captain, avoiding a massive uproar in the team.

Keep in mind that a vice-captain will be wearing the armband if your captain isn’t selected in the starting lineup for a match. This could be an easy way to have the player you want acting as the captain.

Behind the captain and vice-captain you can put more players on the selection list to act as captain if both the first choice and vice-captain aren’t available. These players could be future candidates for the captaincy role and they will move up the list automatically if a player above him on the list leaves the club or is cut from the team.