This guide will explain the feature Playing Time Pathway

In Football Manager 2020 the new Playing Time feature was introduced. This replaced the squad status feature, revamping the model and giving us more options to make it more realistic. In this guide we will explain more about the feature and we will look at all the options you have and what they mean.

Like we said in the intro: Playing Time has replaced Squad Status in Football Manager. This feature will allow the manager to provide a better and more descriptive understanding where a player fits into a squad. This will make it easier for you to rotate players between games, keeping a better track of the players and their happiness and have more control over the player's behaviour.

The new Playing Time feature has a direct effect on a player's happiness. Follow what you have promised and they are happy. Breaking your promises will make sure problems will arise. This is pretty much the same as the former Squad Status, but with all the new options and tiers of Playing Time you have it will be easier to monitor your players and keep a close eye on their happiness.

Where do you change Playing Time?

There are two areas where you can change or set the Playing Time for a player.

If a player is already on your team you will be able to change his Playing Time Pathway in his profile (Overview > Happiness). This tab gives you an overall overview of the player's happiness. It shows some cool stuff like the player's personal relationship to you. 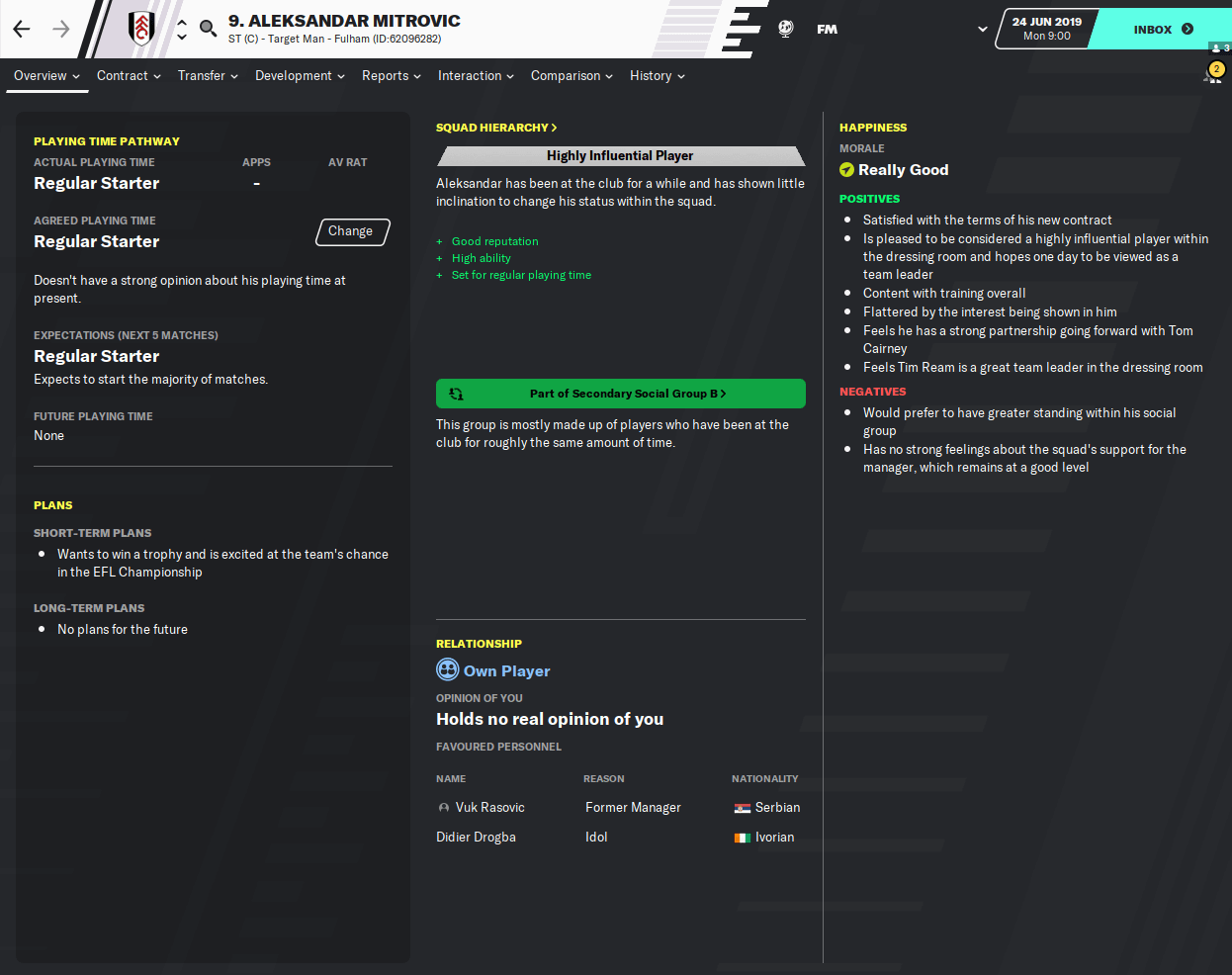 One of the cool features of Playing Time is Pathway. This gives way more definition to a player’s standing within the club and will allow you to give players a unique view of their future at your club. A young and talented player from your own academy could be given a pathway over multiple seasons, developing from a Future Prospect to a Star player at your club.

The tiers of Playing Time are as follows:

This is your Lionel Messi or Cristiano Ronaldo. There can be more than one star player at the club, but realise that the Star Player will expect to be the first name in your starting eleven and the salary that comes with it.

This might not be your ultimate star, but Important Players are the ones that will play every game if they are available.

A player who will play most of the games throughout the season, but will not be the one to take control over the dressing room. He will also accept a position on the bench from time to time.

This is a player who is ideal to use as a rotation option.

A player who has the skill to be a game-changer. He might not start a game very often, but will enter the pitch if the team and the game needs him. A good example would be an experienced and big striker who could force a goal in the final moments of the game.

This is a player who will get some game time over the course of the season, but largely accepts their place at the bottom end of the squad.

This option is only available for a club that has a B Team. This is a player aged 24 or older who is a B Team stalwart with no aspirations to play for the top club.

A player who is no longer needed at the club. He will not play and will be sold at the earliest possible moment.

This highly-rated youngster is expected to break into the first team on the short-term.

A highly-talented young player, but also a player is still some way from the first team. Could be given some playing time, for example during a cup game or friendly games.

A good young player with varying degrees of chance of eventually playing for the first team.

Goalkeepers have their own set of Playing Time tiers.

This is your Manuel Neuer, David de Gea or Marc-Andre Ter Stegen. Your number one in goal! A possible level for this type of goalkeeper could also be Star Player, but most goalkeepers will be a First Choice Goalkeeper.

Your number two in goal. He will accept a role on the bench as long as he agrees to be a backup.

A more depth option for a goalkeeper. He will accept that he will only play for the first team if injuries or suspensions force you to pick him.

He will expect to play all your cup games during the season if you want to rotate. This role could actually be part of the backup role in most cases

The goalkeeper will play all domestic cup competitions. Again this could be part of the backup role in most cases.

Remember Gianluigi Buffon at Paris Saint-Germain? He was promised to play all games in the Champions League to pursue his life long dream of winning the trophy. This goalkeeper will expect to play al continental competitions.