An in-depth look on the Recruitment Analyst backroom staff role in Football Manager.

The Recruitment Analyst is a new role in the world of Football Manager. The former role of Data Analyst has been split into two different roles: Performance Analyst and Recruitment Analyst. This last new role is there to increase the performance of your scouting - or recruitment - team and can give the manager more detailed information on potential signings.

What is a Recruitment Analyst?

A Recruitment Analyst is as said earlier part of the recruitment team in Football Manager. This team includes the Scouts, Director of Football and Loan Manager.

The role of the Recruitment Analyst is mainly one that is an extra addition to the Scout Report and has been added mainly due to the growing importance of statistics and data in both real football and Football Manager. 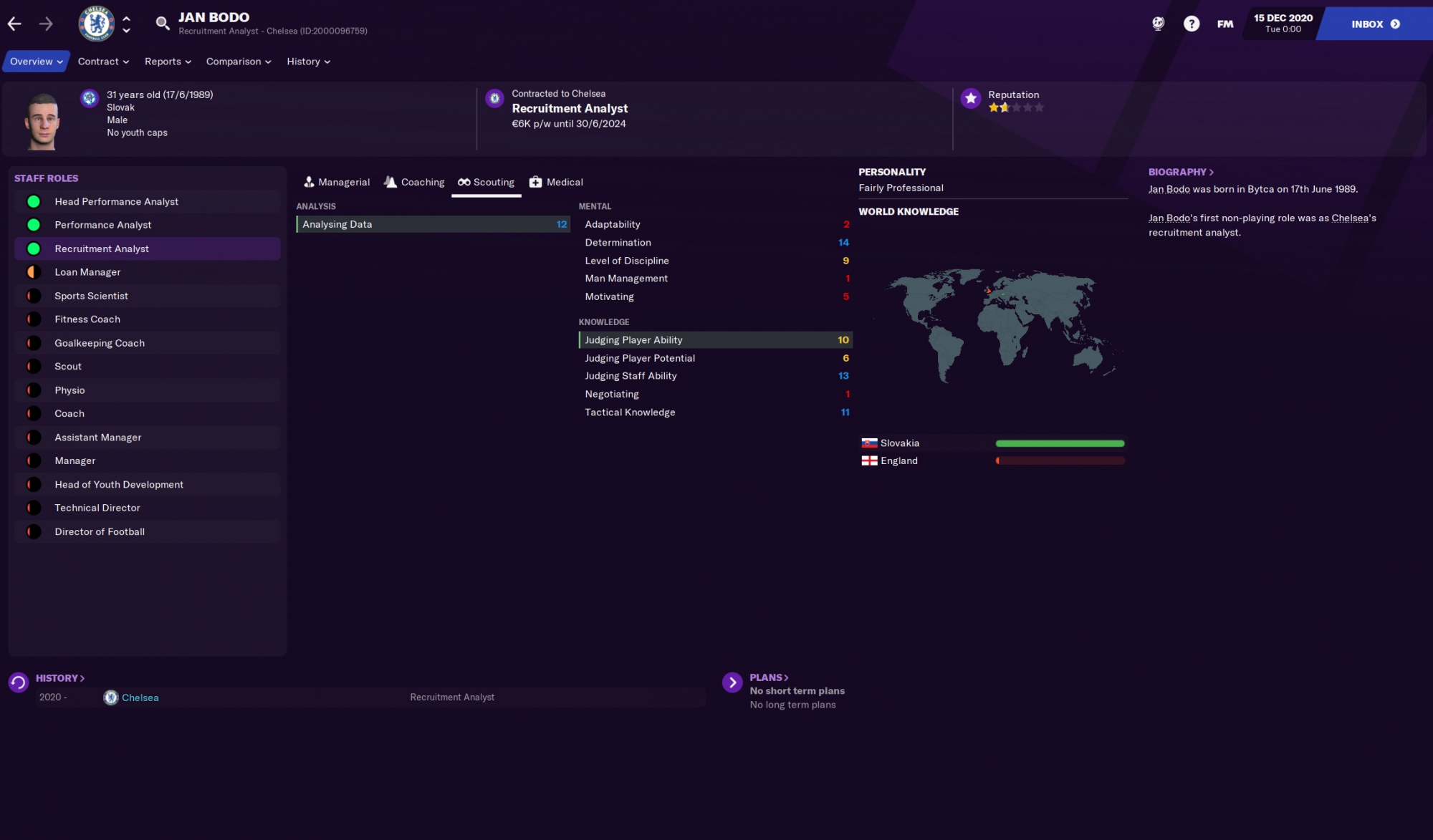 Read more on the Performance Analyst

What are the tasks of a Recruitment Analyst?

The Recruitment Analyst can do an analysis on players you may want to sign and he will then report his findings to you. It is possible to see many different statistics and you can use these when making a choice whether to buy a player or not.

Key Attributes for a Recruitment Analyst

The Recruitment Analyst's attributes are located in the scouting section of a staff member's profile. There are two key attributes highlighted by Football Manager:

The ability of a staff member to appraise the current standard of a given player or team. For a Recruitment Analyst the only needed attribute in the Judging department. He doesn't need to know a player's potential, he only reports on his current performances and ability.

If you are interested in signing a player you will need to use scouts to learn more about his strengths and weaknesses. Nowadays you also have the option to request an Analyst Report from your Recruitment Analyst. He will then analyse a player's performances during matches. From the raw data he collects he will generate report for you. You can then approach this report in different ways:

Through the Scouting Meeting that appears periodically in your inbox, but also through the player's profile (Player > Reports > Analyst Report). You will then enter at the following area: 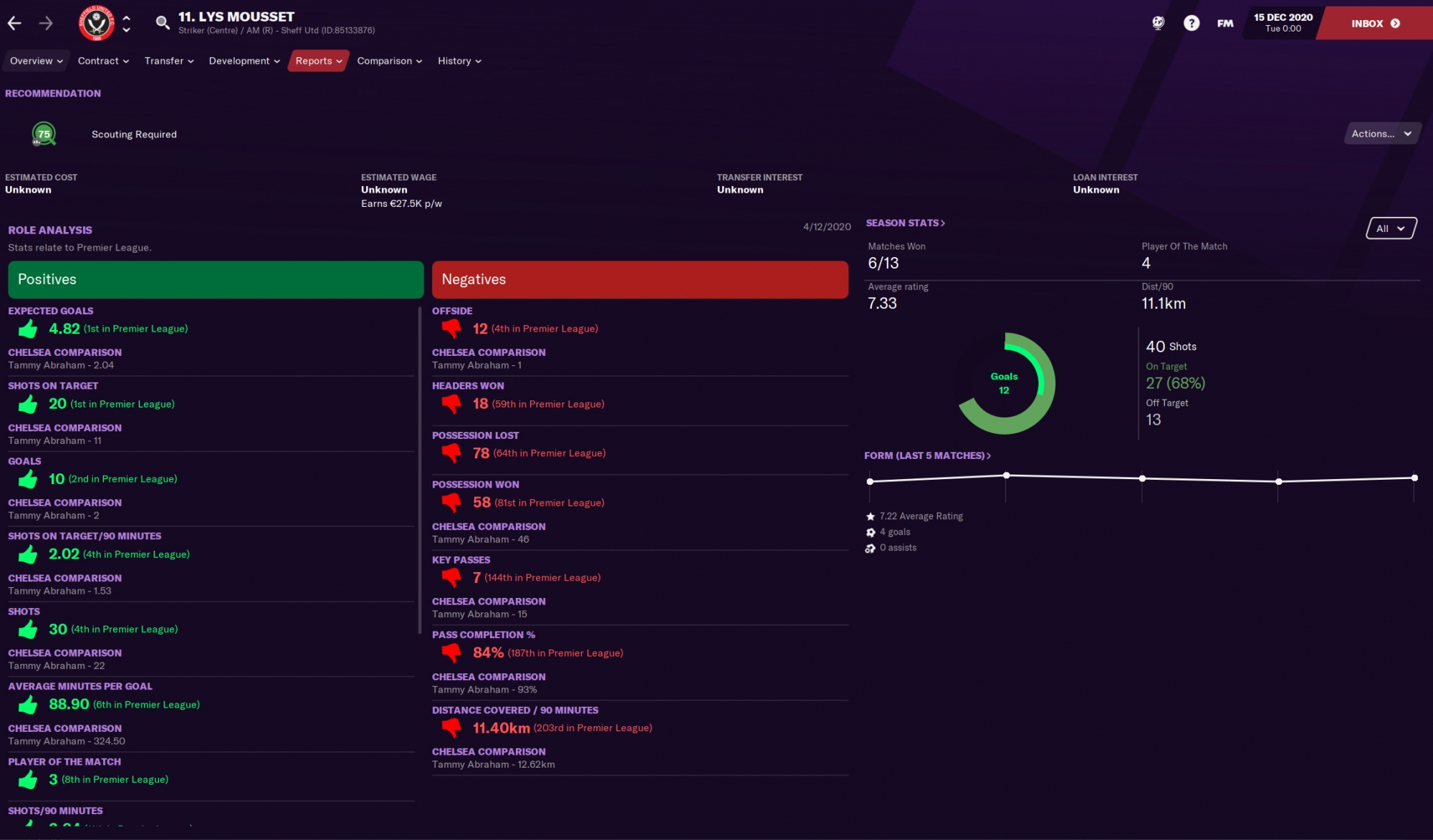 The Role Analysis section is the most important part of the Analyst report. It is split into two parts: Positives and Negatives. In the positive section you will see the player's best stats, in the negative section you will see the player's worst stats. A comparison is also made with a player from your own club who plays in the same position as your potential signing.

The Recruitment Analyst gives you all kinds of different statistics and you can use these to see if a player fits your tactical preferences. For example, if you want your striker to win many headers, you can use the Headers Won statistic. You can quickly see whether your potential signing is better in the air than your own striker.

Should I hire a Recruitment Analyst?

Is the Recruitment Analyst an essential backroom staff member? No. You won't fall behind if you never sign one for your club.

Is he useful? Yes. He can help you decide who to sign if you have multiple targets for one position. The Analyst report could then help you pick out the player that suits your tactical preferences the most.

It depends on what your own ideas are in the save. Are you going to rely on the judgment of your scouting team or do you often go out on your own and would you rather watch players actively? In the case of the first answer, it is good to add at least a couple.

If we look at the clubs in the Premier League, the number of Recruitment Analysts differs per club. Leeds United, for example, has none, Liverpool has five.

So it really depends on what you want in your save. Our advice: Appoint as many as you are allowed to. A good recruitment team has a lot of advantages and in many cases they do a really good job.