This guide will explain the basics of the Team Report page in Football Manager 2021.

The Team Report is the best way to learn the strengths and weaknesses at your club. This area should probably be the first click you do after you have been appointed as manager at a club. Here you will receive all the information you will need to build a successful team. The Team Report is broken down into a number of panels, with the Overview panel being your starting point.

Your starting point when selecting Team Report from the menu. Here you will see a Best XI based on your current selected tactic. You will also be able to click to the Strengths and Weaknesses. 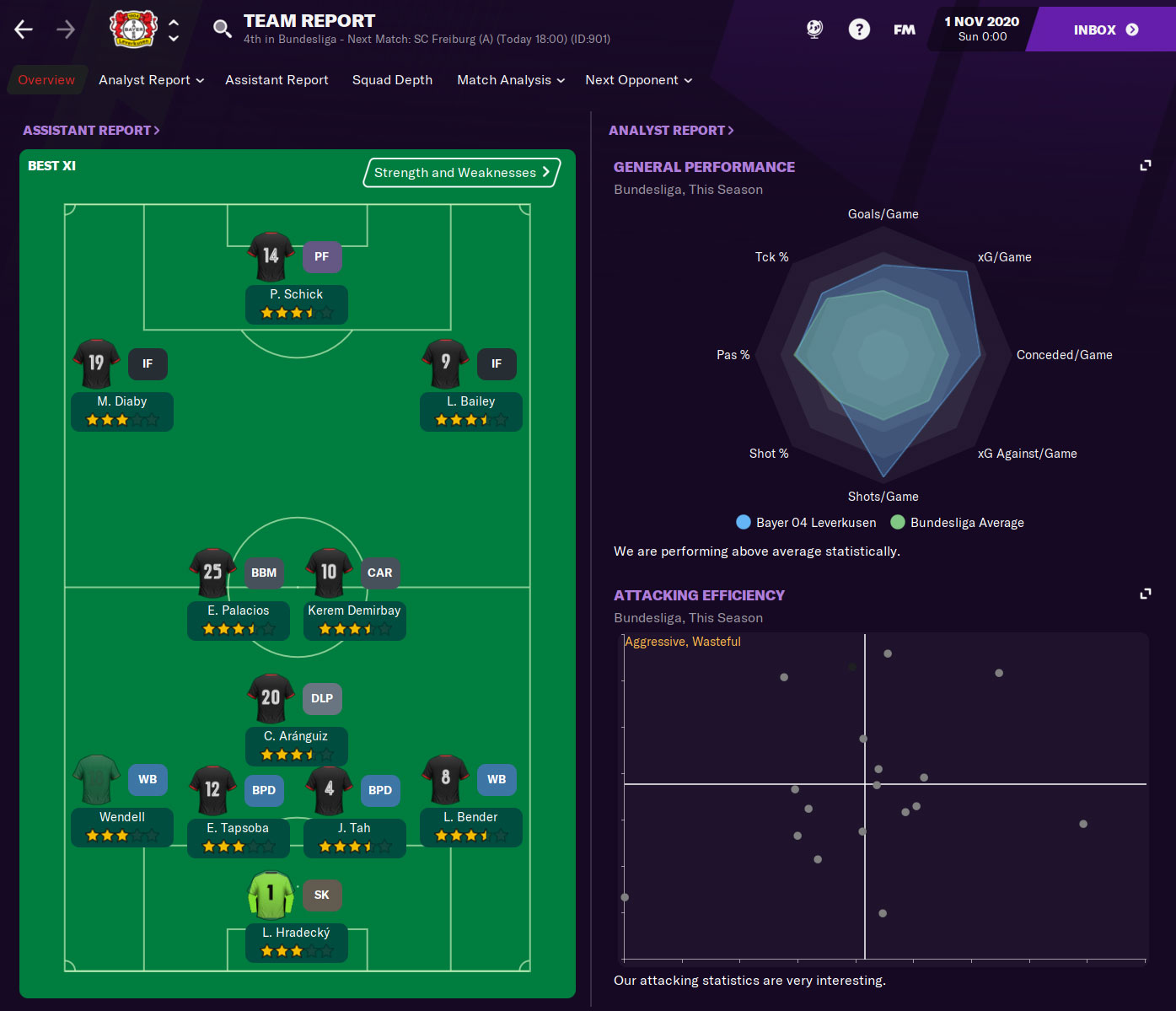 The second panel is the more detailed Analyst report we referred to on the overview page. Your Performance Analyst will report on several areas of your own team

An overview of the analysis of your team and your performances. You will see different areas like overall performance, formations you have faced and how you have scored your goals.

A detailed overview of several key statistics of your own team. Areas which are covered are Goal Attempts, Passes succeeded, tackles won and more. Each statistic shows your team overall, best and worst player.

A detailed overview of several key facts. This area covers both your own team and the league you play in. Some examples of facts are Youngest Player, Heaviest Player, Average wage and number of nationalities.

This is one of the most interesting panels of the Team Report as this will allow you to compare your team to the rest of the division. Each option on this panel shows the Highest and Lowest averages in the league.

These attributes are then split into 3 areas: Lowest average, Average and Highest average. It automatically displays the averages of your team, making it really easy to spot good or poor areas on your own team.

For example the screen below. This shows that Bayer Leverkusen have the best Tackling and Marking of the league, while Positioning is just below the highest average. However, it is also clear that Leverkusen could have a potential problem when attacked through the air. Heading, Jumping and Strength are all close to the lowest average of the league and will need improvement if you don't want your opponents to exploit these weaknesses. 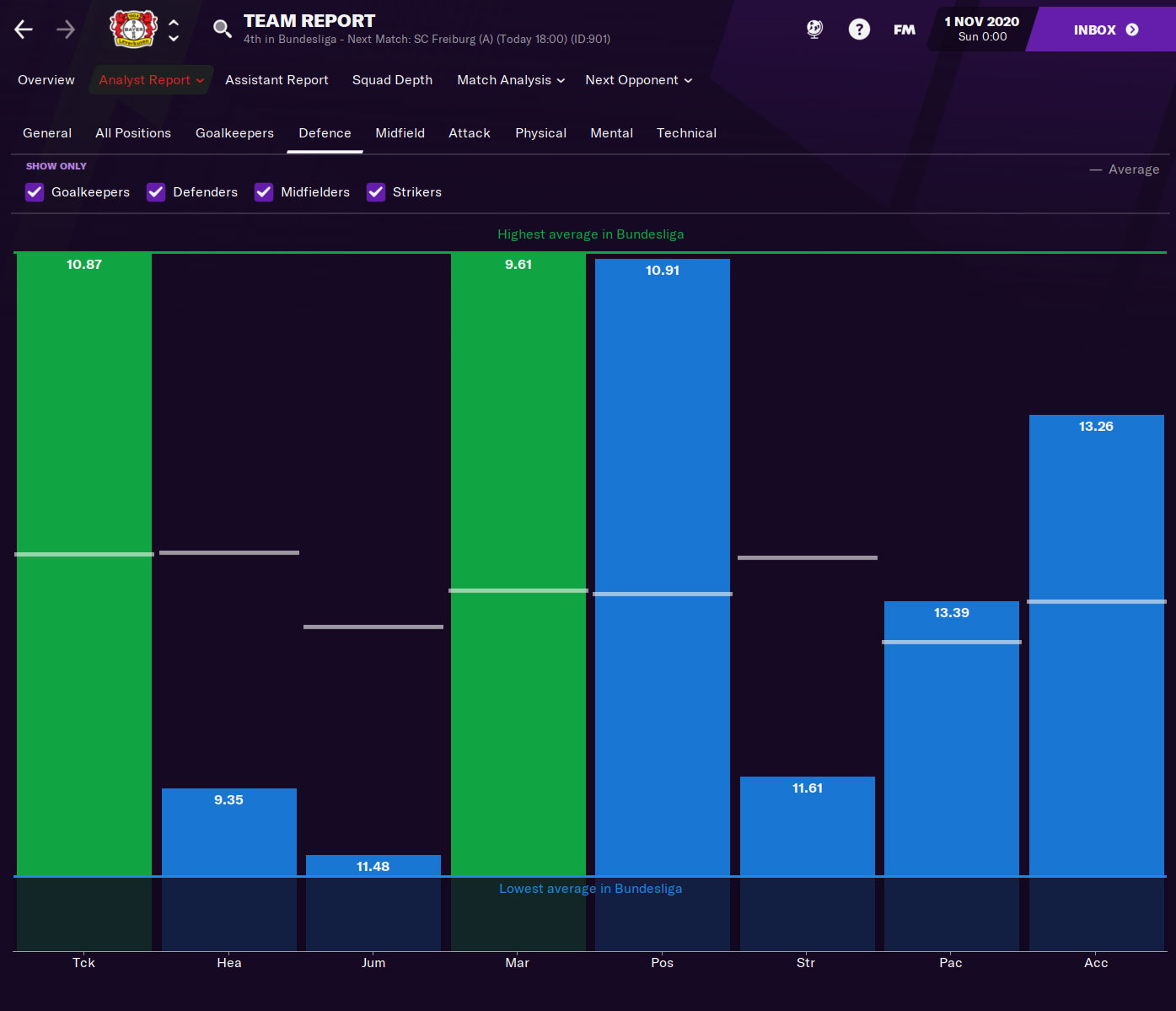 The assistant report panel is pretty basic. This panel shows the best XI you also see on the overview. This best eleven is based on your current tactic. It's important that your assistant has high Judging Ability and has good Tactical knowledge to give you the best advice on your best XI.

Here your assistent will give you advice on several key areas. Examples are:

The assistant will report on multiple areas and you can use these to improve your tactics, sign new players or even change your focus on training. 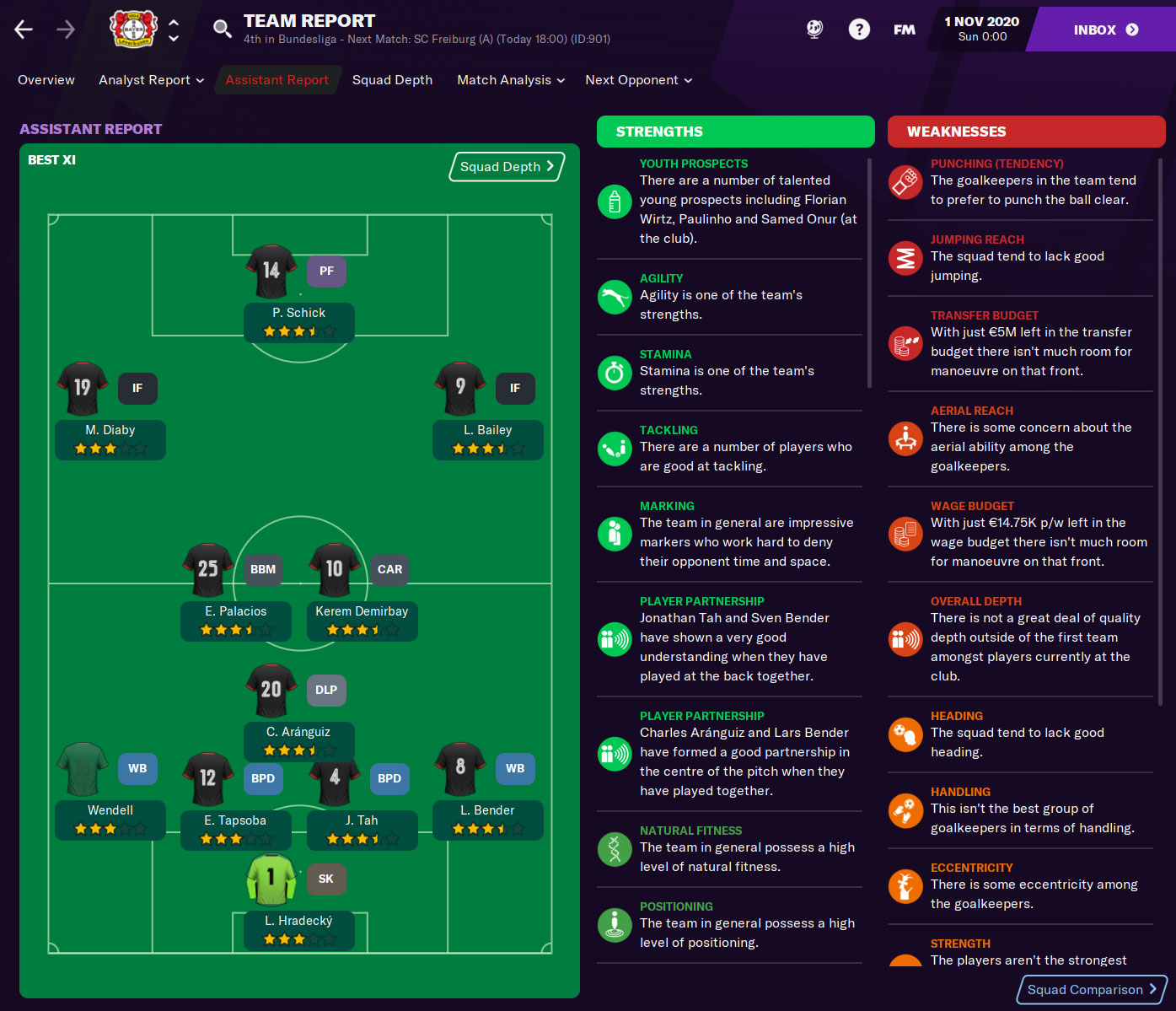 When you are at a new club this is probably the panel you should be visiting more than once. Here you will receive information on the depth of your squad, meaning how many players do you have for each position (based on your selected tactic). This makes it easy to spot which positions are well covered and which positions need improvements.

You can customise this panel to your own need by changing the formation to see different variations, show current or even potential ability and Role suitability. It is also possible to change the person you receive the report from. This allows you to handpick the coach or assistant with the best Judging abilities and tactical knowledge.

A very handy option is the Customisation option. Turned off you won't be able to make any changes to the suggestions you are given. Turned on you will be able to makes changes. It is then possible to add or delete players from certain positions to balance out the team more.

The filter option allows you to make the selection you see even more detailed. Here you can even select to add or hide future transfers (both in & out), Loans (in & out), Trials and players with expired contracts. Another cool add-on is the option to only show a certain amount of stars. This will only show the players with a certain minimum ability. 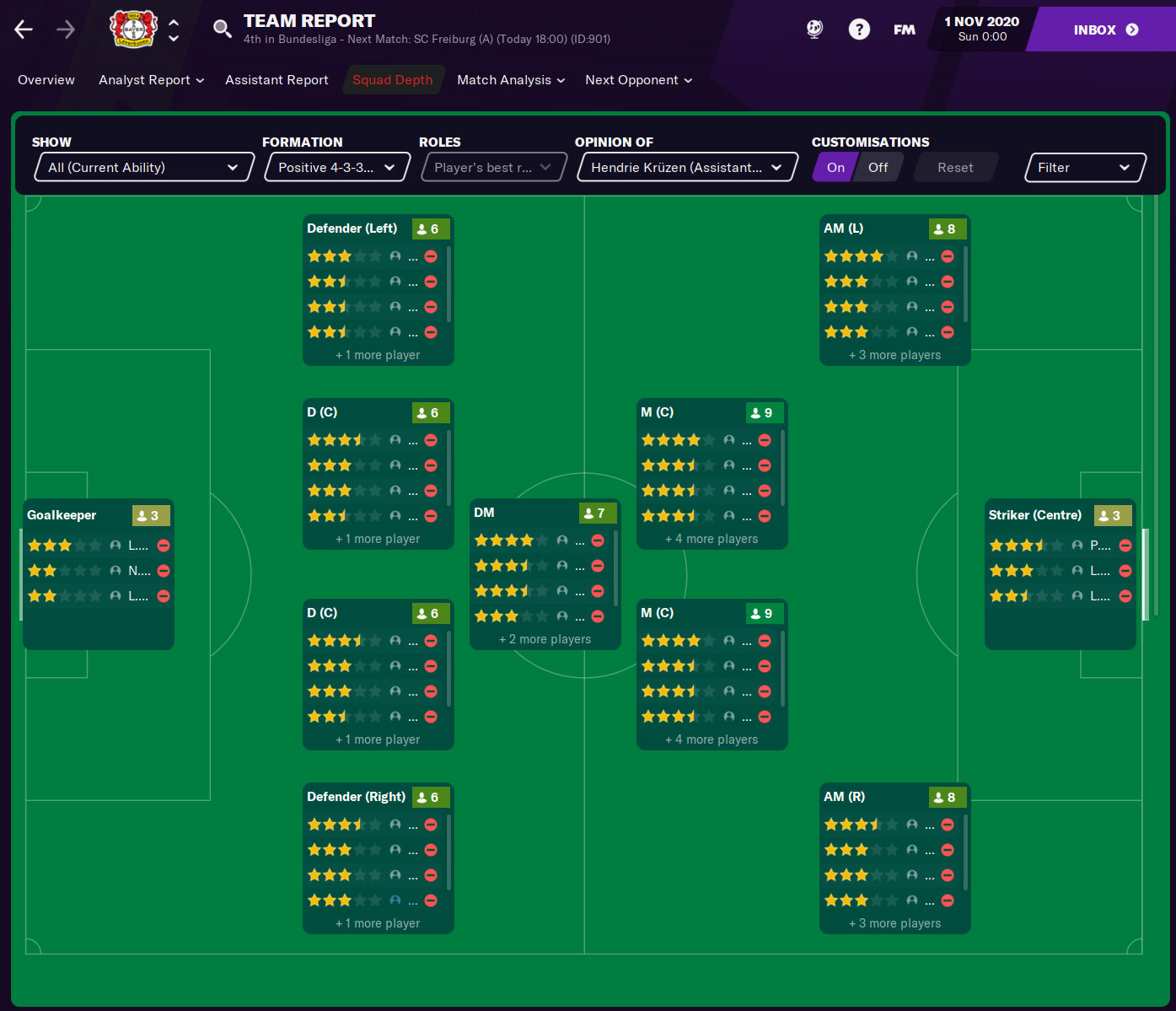 On this panel you will be able to request match analysis from one of your previous matches in the season. It is a good way to see how your team performed during the last game and it could help you improve your tactics.

You have two options here: Recent Matches Analysis, which will give you a summary of your performances during your last matches. Individual Match Analysis will allow you to handpick one or two matches and look at your performance. You are then able to select various statistics including Shots, Passes, Crosses and many more.

In the Next opponent panel your scouting and analysis team will give you information about your next opponent. Here you will find information on expected formation & line-up, strengths & weaknesses, injuries and suspensions.

A panel that shows you information on the recent matches of your opponent. This is split into Positives (They have defended attacks from the left very well) and in Negatives (They've scored none of the 3 shots they've attempted from outside the penalty area). You also see the Goal Analysis and this shows you which type of goals they have scored the most, but also which type of goals they have conceded the most.

This panel shows you several statistiscs and these are compared between you and your opponent. You see some player stats, league history and league results this season.

And last but not least you have the Past Meetings panel. Here you see an overview of the matches you have played against your opponent. This is mainly interesting for longer saves as you start without any history in the first season. 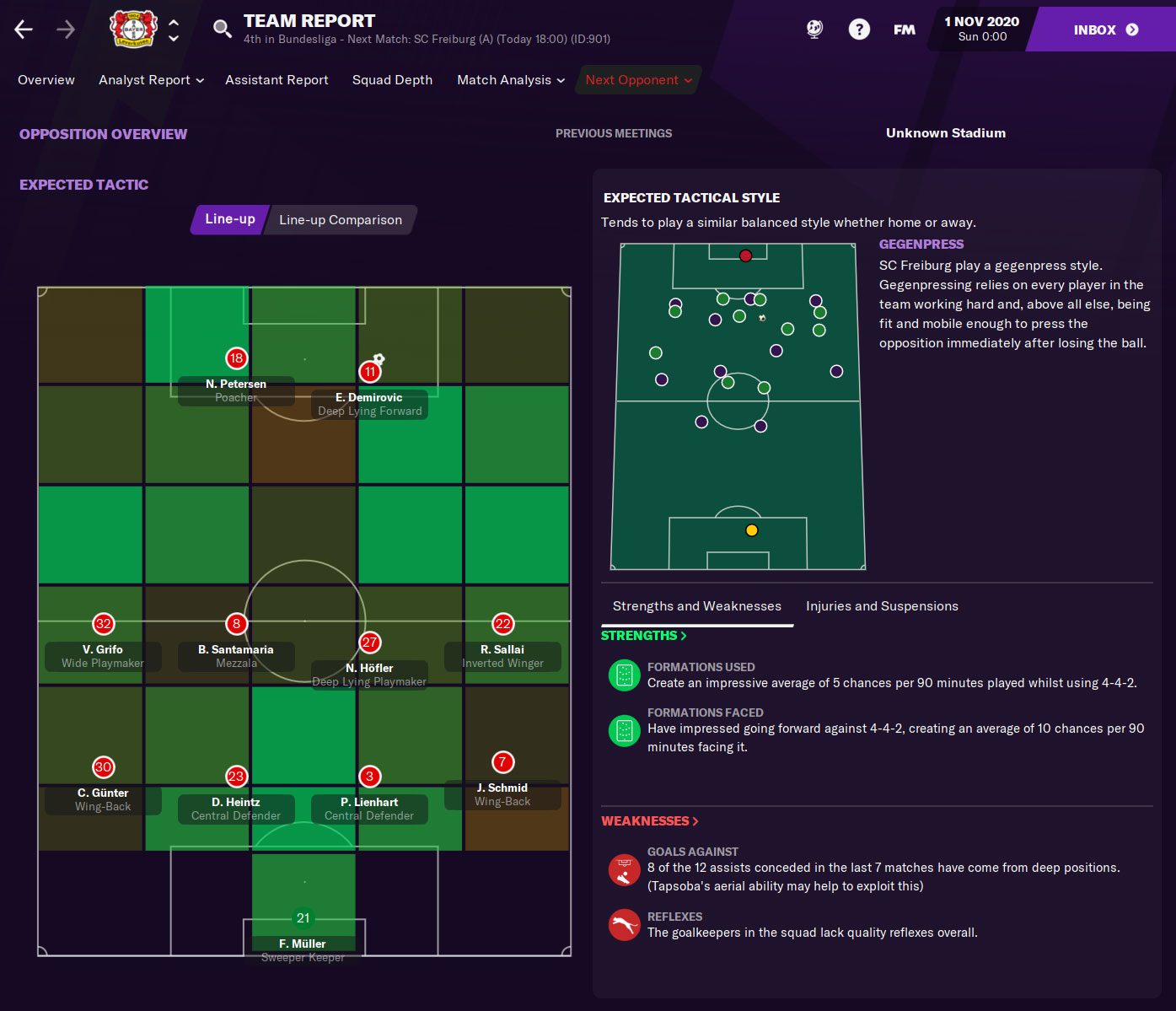 The Team Report section in Football Manager is a very good place for multiple reasons. Not only will this allow you to learn more about your squad (squad depth and league comparison) when you arrive at the club but is also a interesting section for match & opponent analysis throughout the season.