How to start a new career

This guide explains how you can start a new career in Football Manager.

In this Football Manager guide we will be explaining you all you need to know about starting a new save. We will show you what to look for when you want to start a new career and will give you some hints and tips to make your new save even more interesting.

Once the game has loaded you will enter the starting screen of Football Manager. Based on the (custom) skin you use, this screen could vary in its look and feel. The standard Football Manager 2019 skin is pictured below.

Once you have pressed the CAREER button, you will then be taken into the wizard for starting a new game.

The first screen you will see is the Career game setup screen. We will talk you through all the options you have.

Here you decide how you want to start the game. There are four options to chose from. You can start as a club manager (standard pick), an international manager, a club and international manager or you can start unemployed. This area will be empty if you have any 'editor files' loaded into the game. These could be a transfer update, a new league or simply files that add or change club names. 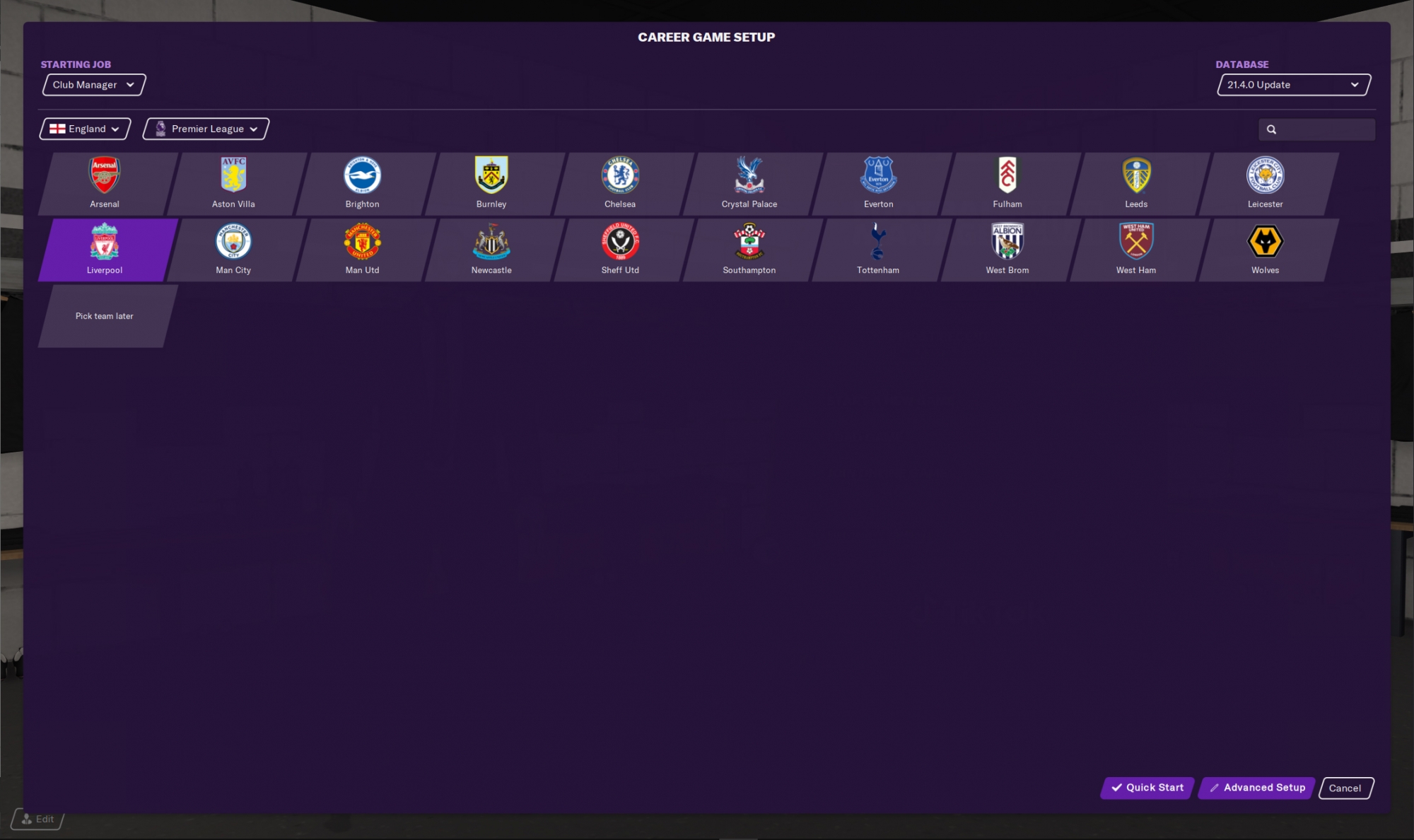 In this screen you will also have the possibility to pick the nation, league and club you want to manage in. The league you pick from here will also be used to decide your starting date (more on that further down the guide).

This one can be used to pick the database you want to play with. Out of the box there is one database to play with. In FM21 it is the 21.1 database. After the winter update (which is usually released in the early stages of March) you will also be able to select the 21.4 database.

The difference between these database is fairly simple:
21.1 has al the standard summer transfers added, while the 21.4 winter database also includes the transfers completed in the January window.

In the Database drop down you will also be able to load extra 'Editor Data Files' (items that have been created using the Pregame Editor.) Items you can add here are: 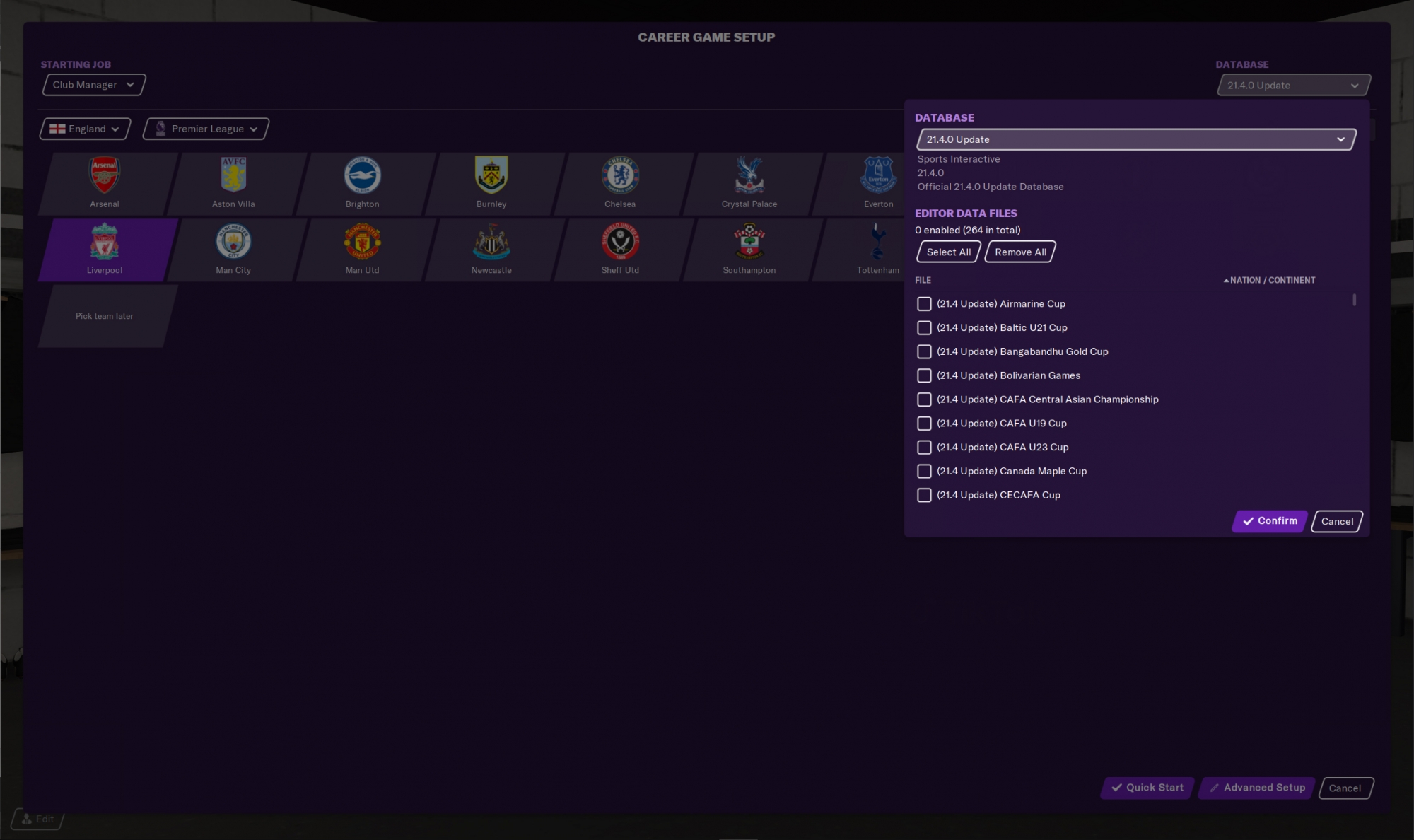 You also have the option to click the Advanced Setup button. This will take you to a new area of the new career set-up. Here you will be able to add more nations, select the size of the database and some other 'useful' options. We will be discussing this page and its options. 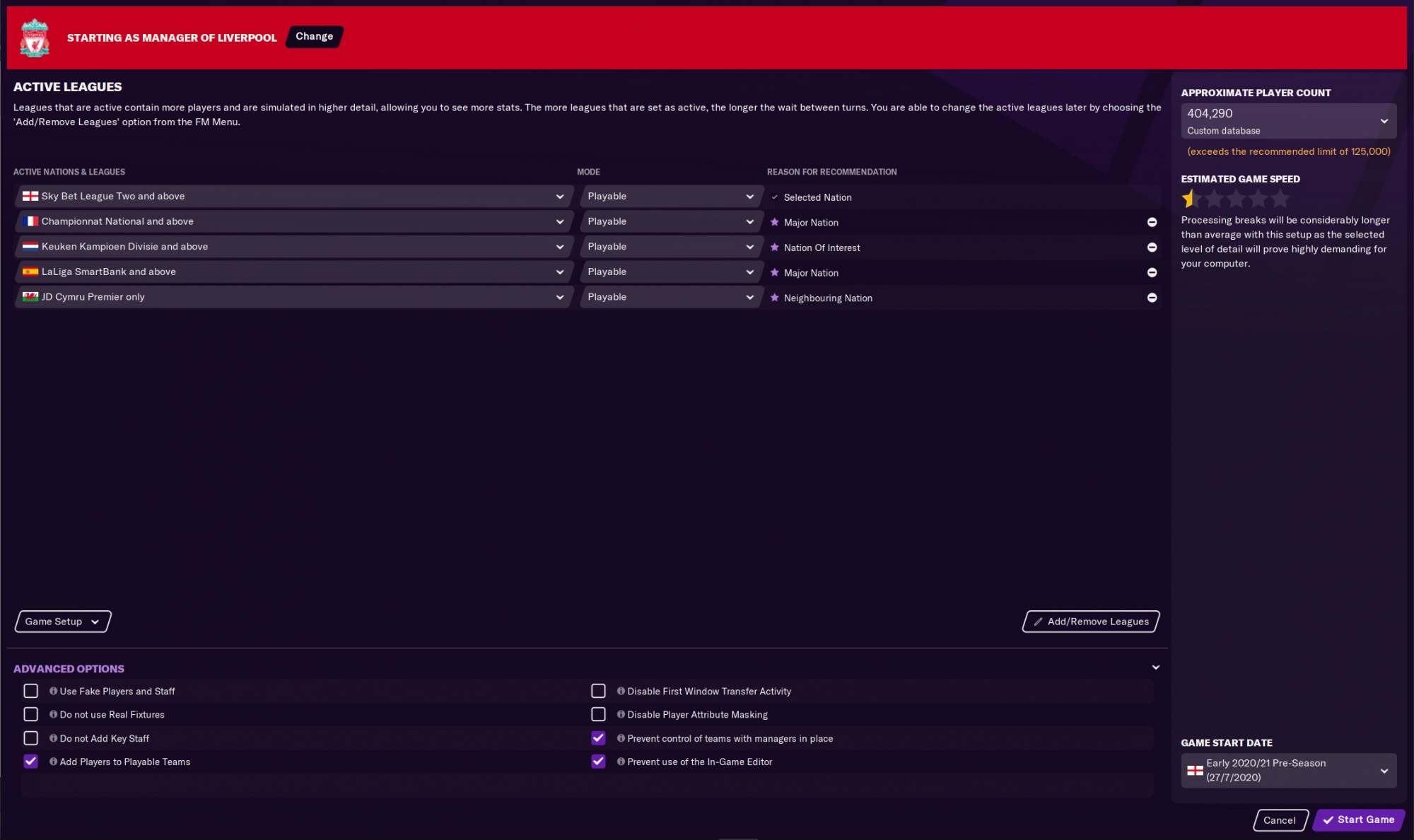 Here you can see which nations are loaded and do you have the option to add/remove leagues. The minimum is 1 active league and there is no maximum. However, selecting too many leagues could drastically slow down the game.

A list with the current nations you have selected. By using the drop down of each nation/league you will see the playable leagues in that country. You can use it to select the number of leagues you want to load from that country. Countries like England go down all the way to the 6th tier, while Holland has only two playable levels.

In this drop down you have two options: Playable or Viewable. Playable is the standard pick, meaning you can pick a club and start playing in that nation. Viewable means you can't manage a club from that particular nation, but you will be able to see more details on the league. You can see the league table, stats and more. These areas aren't available if you don't select a nation at all.

Good to know: If you select Viewable, the game will load less players and this will keep your game faster to process.

If you select a club at the Starting Job screen right after selecting 'New Career' and then go to advanced, Football Manager will then automatically select some leagues that match the league you will be starting in. Reasons to add are: Major Nation, Neighboring Nation, Manager added or Selected Nation.

For example: if you start in Brazil as manager of Sao Paulo, the game will automatically add nations like Argentina and Colombia as these are either a major nation or neighboring nation in South America.

This button will take you to a new screen where you will be able to select more nations if you would like. The sorting is based on the continent. 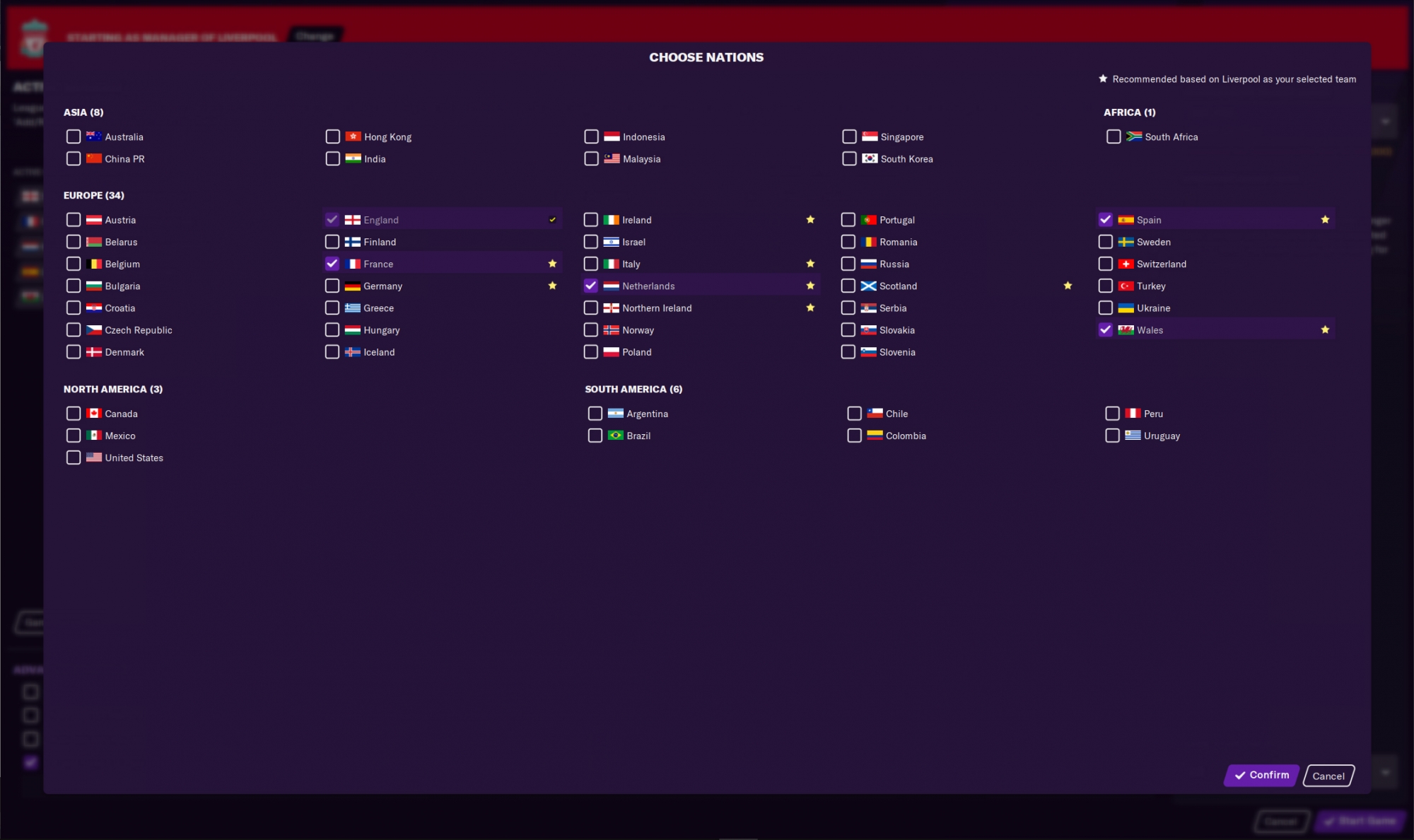 Use this area to add even more specific options to your save game. We will discuss all the advanced options you have. 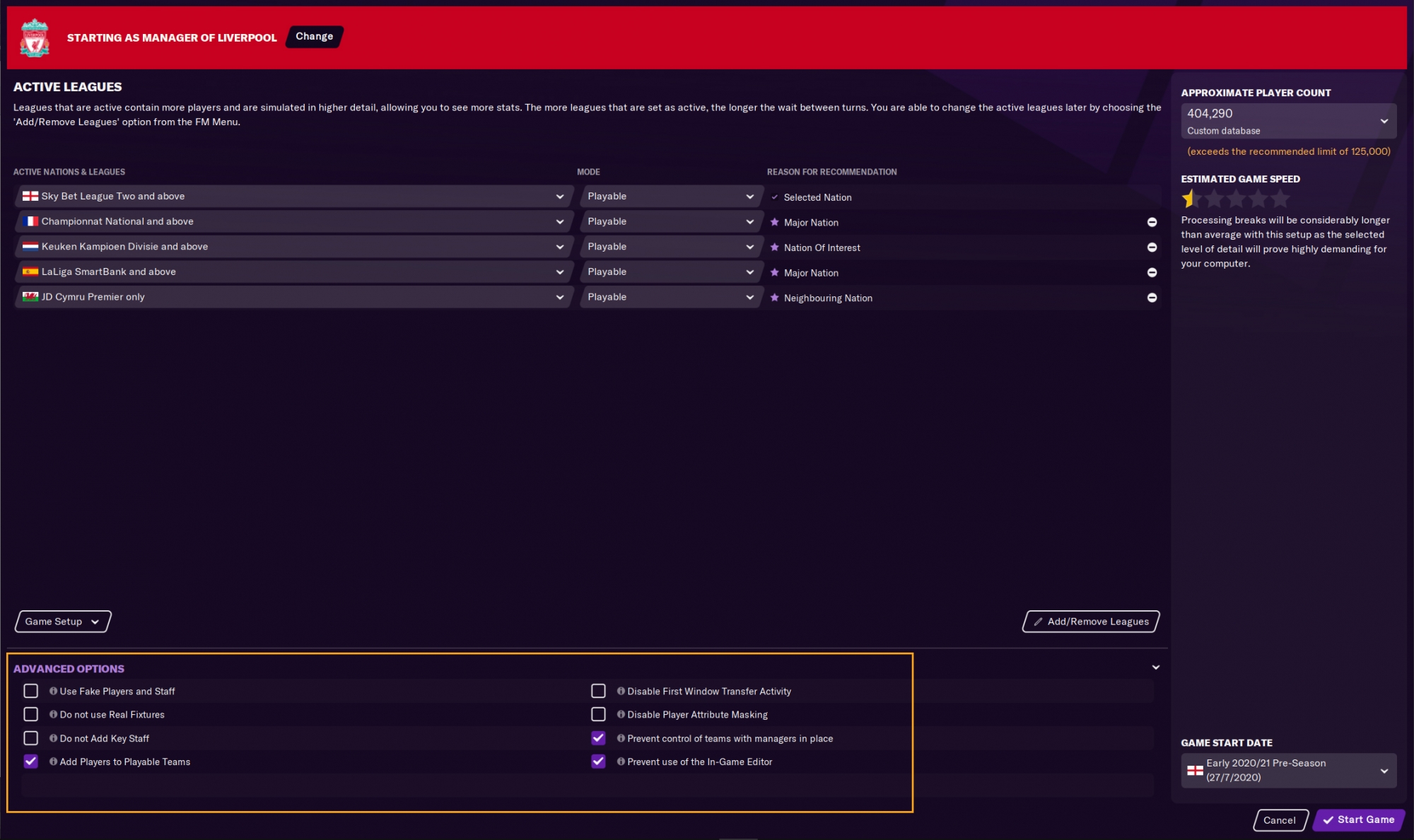 Use fake players and staff

If you start a save with this option ticked, all real players have been replaced by fake ones. This will add some difficulty to your game as it is more difficult to know who to buy from the start. However, if you look closely you will notice they show quite the resemblance to real players.

Do not use real fixtures

Do not Add Key Staff

When disabled, this option will add key backroom staff (such as an assistant manager) to teams which do not have them. This is mainly for leagues that have been created using the editor and do not have full or complete rosters. If you are playing in one of the standard leagues you can leave this unticked.

If any playable team in the selected database is not able to fulfil particular squad requirements at the start of a new game, this bos will ensure that their playing squad will be filled out with sufficient personnel. This is mainly for leagues that have been created using the editor and do not have full or complete rosters. If you are playing in one of the standard leagues you can leave this unticked.

Football Manager will start in the preseason that just has happened in real life. Therefore the database reflects the world AFTER the transfer window has closed. By disallowing transfer activity in the first window, you will make sure all the teams will start the season with their most up to date roster and not being able to complete transfers.

NOTE: This will also disable free transfers in the first window.

Prevent control of teams with managers in place

Prevent use of in-game editor

If selected, you will not be able to use the in-game editor in any case. This helps you not to cheat basically ;)

In this area you will be able to select the number players in your database. The recommended limit from FM is 125.000. You can exceed this number, but expect drastic slowdown's in the speed of the game.

You have four options to choose from:

When selecting advanced, you will then see a pop-up appearing where you can select more options to load in more players. This is useful when you select a top league from a specific country but you also want to load in the players from the lower divisions. Another example is that you don't load in a country into your save (for example Brazil) but still want all the players to be loaded in to make sure you won't miss out on any wonderkids...

In the Advanced setup you have the following options:

Inside of the options you see below, you have some extra options for the players you want to load in. These are:

These options will allow you to be more specific on the players you want to load into your save. This could help the size of the database to stay a bit smaller. 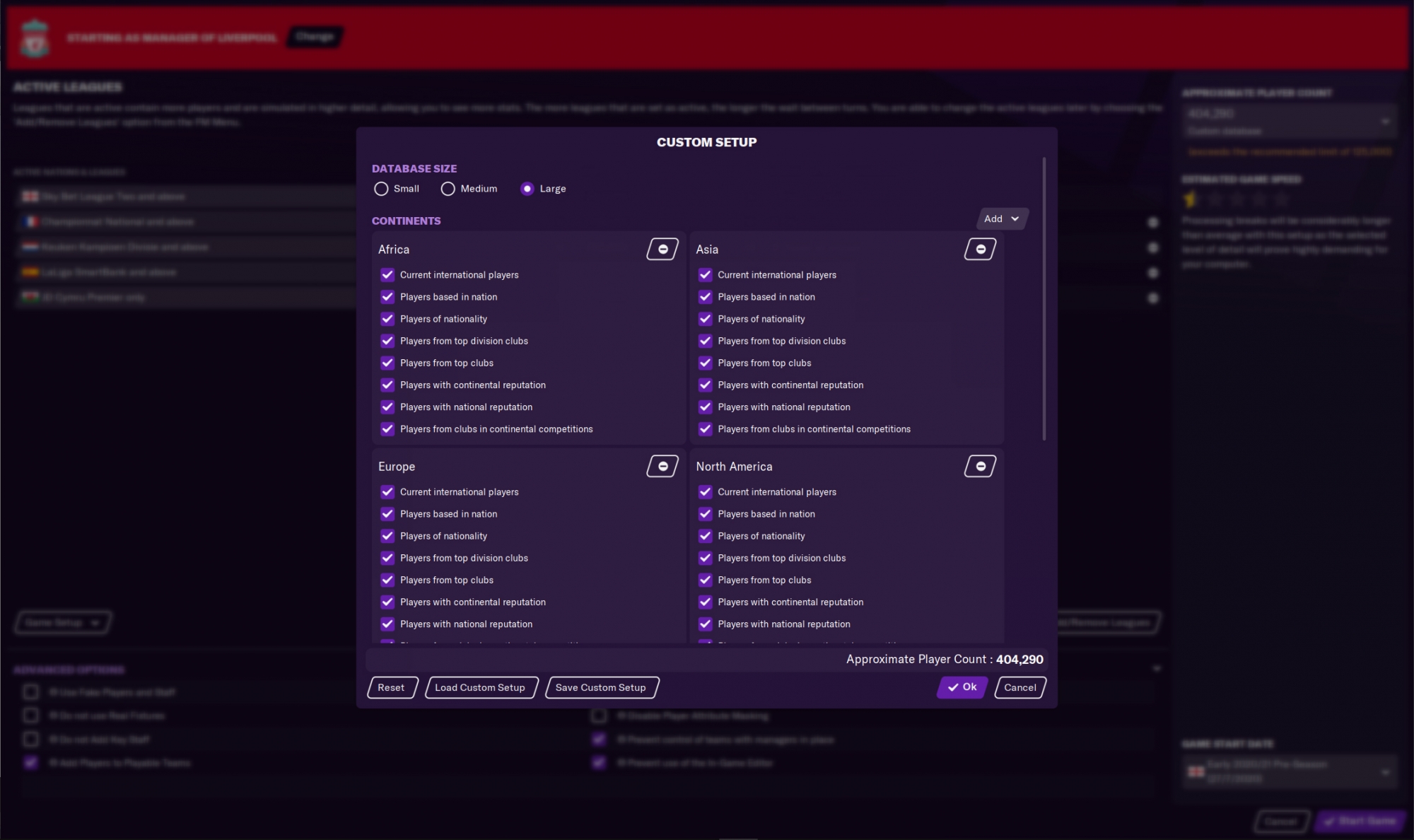 At the game start date you will be able to select the moment you will jump into the game. You can either choose to start as early as possible into the preseason. This will allow you to assess the squad a bit and prepare yourself for transfers before the seasons start. However, if you don't like preseasons at all, you could also start a day before the season starts or even when the first games in the Champions League will start.

The exact start date you will be able to pick depends on the nation and leagues you have selected. For example: the Dutch league's earliest option is 2nd of July, while Italy has 16th of July as the earliest date. 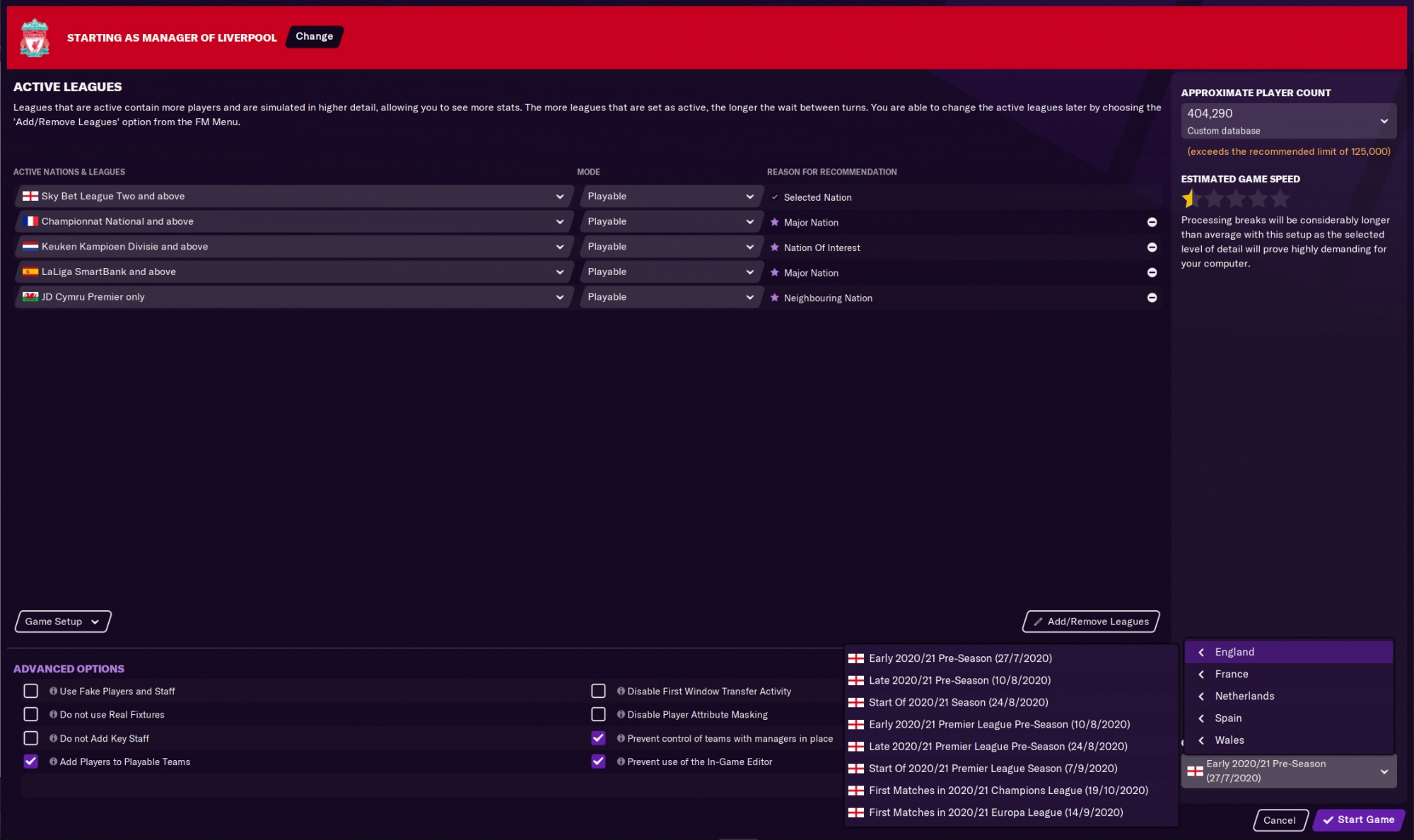 Once you have selected all the nations, leagues, advanced options and database size, you are ready to start the game! Now hit that button that says 'Start Game' and get going! Good luck in your managerial career!

After your game has started you will be able to Create your manager.

How to video on starting a new career