Major changes to FM Touch for FM22 and beyond

Sports Interactive have released news about Football Manager 2022 Touch for the release of FM22 and beyond.

Football Manager Touch will be disappearing from the line-up of Football Manager with the release of FM22 except for the Nintendo Switch version. That has been confirmed by Sports Interactive director Miles Jacobsen.

In a developers update Miles has confirmed the news that the seperate and 'simple' version of Football Manager will disappear from their line-up, starting with FM22. The 'Gaffer' has acknoweledged that the most important reason for skipping FM Touch on Tablet and desktop was the  ‘cost-benefit analysis’.

This means that SI look at how much it costs to develop the game, QA and release each seperate version on seperate devices. Then compare this to the revenue it will bring. While Miles doesn't say it out load, it can be concluded that FM Touch merely costs 'too much' to develop compared to the revenue. That has led to the decision to cancel FM Touch on Desktop and Tablet.

FM Touch was originally released as FM Classic during the release of Football Manager 2013. This Classic mode was a much easier mode than the full version, as it did not have any press conferences, player interaction and other 'neat' features from the full game. FM Classic brought players back to the time you only had to worry about which players you pick for your starting eleven and not about player roles and instructions.

In 2017 the game was then removed from Football Manager and was given a standalone release. This standalone version was mostly used by the community to play in online tournaments as this featured a versus mode. Later on it was also released on tablets and on the Xbox.

Football Manager Touch 2022 will only be available on Nintendo Switch. There will be no version of the game available on Steam, the Epic Store, the App Store or Google Play. Anyone who wants to play a streamlined version of FM anywhere other than Switch will still be able to do so, but the game won’t be called ‘Touch’.

On PC you will be able to play the Xbox edition (which is basically Touch), which can be purchased through the Microsoft Store or via Game Pass. Tablet users will also be able to stream the game through Microsoft’s xCloud streaming service (which is available to anyone with a Game Pass Ultimate subscription).

Versus mode in FM22

As said before FM Touch was used by a large part of the community for online tournaments and online versus matches. Miles has now confirmed (though it was already seen on earlier screenshots of the starting screen) that the Verus mode will be coming to the Full version of the game. However, it won't be available on the release on November 8th. Miles expects that the Versus mode will be released in early 2022, possibly around the winter patch update.

In the matrix below you will which game modes will be available on which platform. 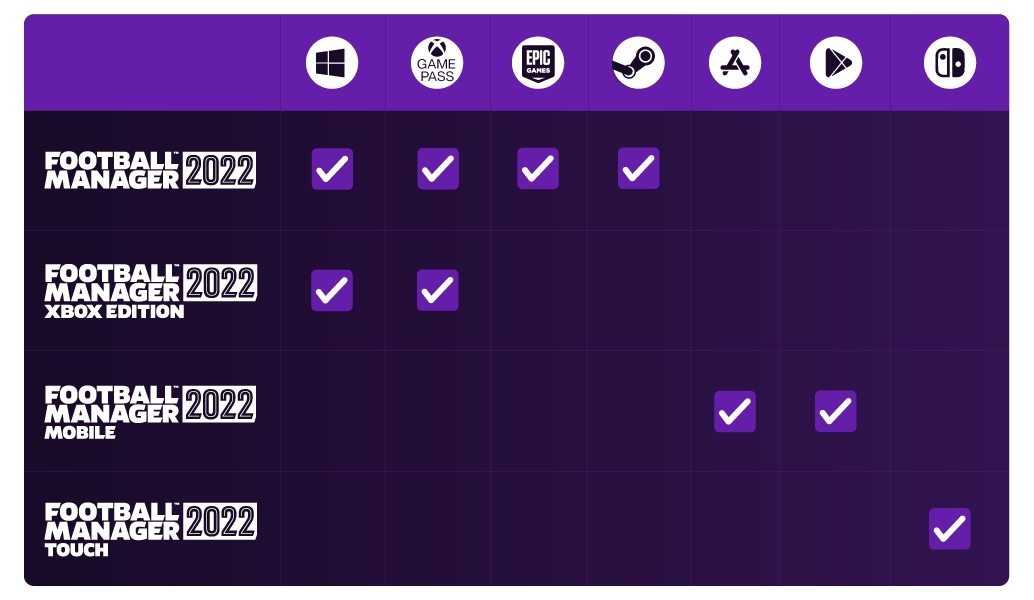 Get your pre-order in for Football Manager 2022 at FMInside and receive a nice discount up to 20%! You will also gain access to the pre-game BETA launch, which is expected about two weeks before the full release on November 9th!