5 One season wonders to manage in FM21

This list shows you five one season wonders to start a save with in Football Manager 2021.

All credits for this guide go to MaddFM and We Stream FM for writing this article and all thanks to them for letting us share it on FMInside.

On the 2nd of May 2016, Leicester City shocked the footballing world by winning the FA Premier League in what was only their second season back in the top flight after gaining promotion in 2014. Led by the “The Tinkerman” himself in Claudio Ranieri, the Foxes’ brand of fast-paced counter-attacking football combined with Ranieri getting the most out of players such as N’golo Kanté, Danny Drinkwater, Riyad Mahrez, Jamie Vardy and Captain Wes Morgan meant that they defied all expectations and logic to not only win the Premier League but become the first team in over 20 years to do so outside of Man United, Chelsea, Arsenal and Man City.

Unfortunately the following season proved to be a struggle for post-Kanté Leicester, breaking the record for the worst title defence in Premier League history finishing 12th which ultimately led to Ranieri’s eventual departure from the club. Football is a cruel and unforgiving game…the real question is though, could you have done it differently? Can you do one better by not only recreating a classic underdog story, but keeping said underdog at the top of their respective league?

Here are five one-season-wonder champions for you to try and emulate in Football Manager. 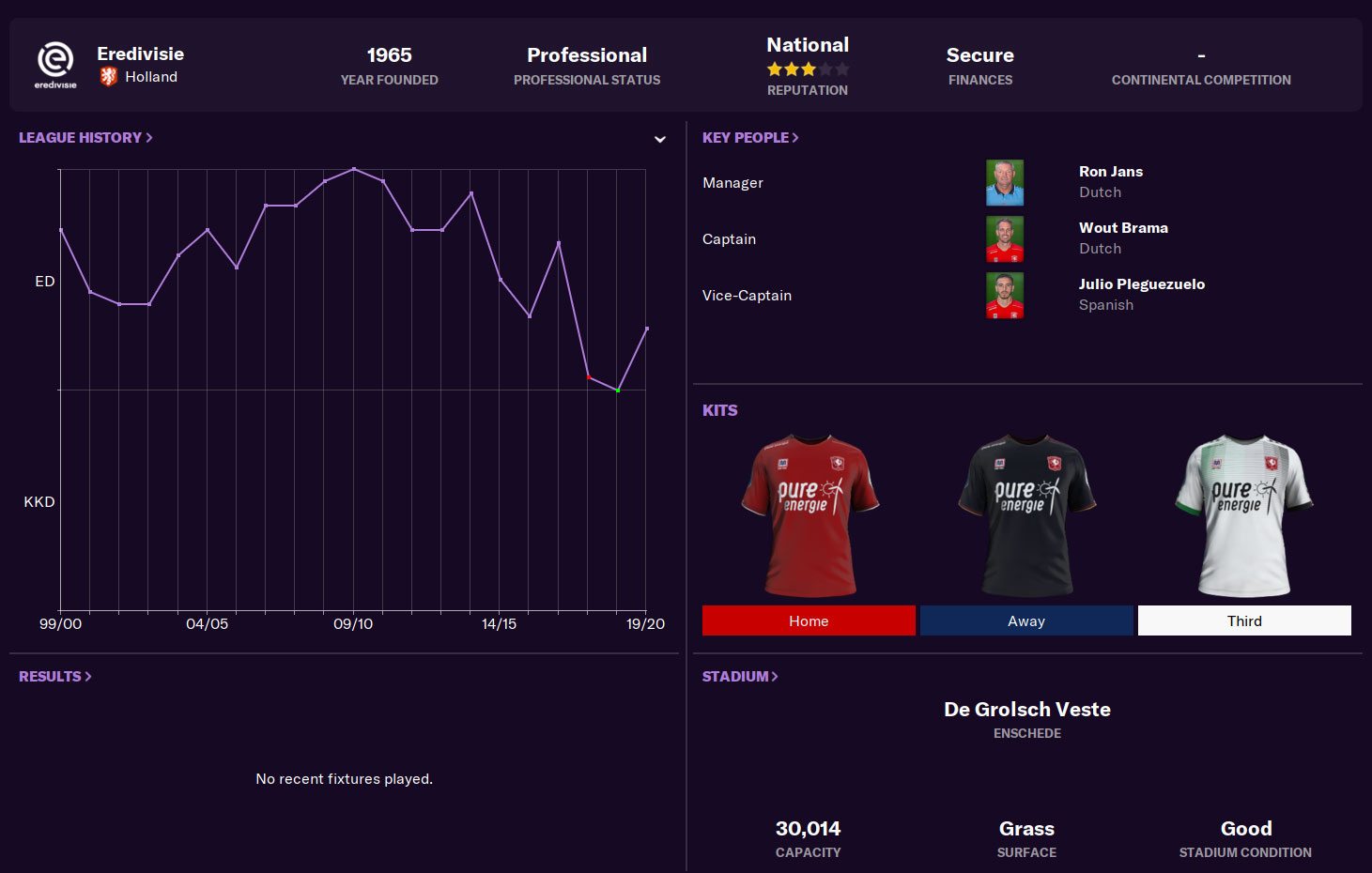 When one looks at the past winners of the Dutch Eredivisie, FC Twente would appear to be the odd one out amongst the great Ajax, PSV and Feyenoord teams that have won the vast majority of titles in Holland over the past 30 years - so much so that Twente fans themselves can scarcely believe that their team were league champions in 2010 under the guidance of former England Manager Steve McLaren. In a year that saw a 22 year old Luis Suarez bag 35 goals for Ajax, FC Twente shocked the whole of Dutch football by narrowly pipping Ajax to the title by a single point with a squad largely made up of unknown or relatively small name players (Bryan Ruiz being their best player...know who he is?).

The following year Twente managed to come second, however thus began their downfall where they fell out of the top four for the next three seasons. Since then they have failed to come even close to competing with Ajax and PSV, and with a relatively unknown squad predicted to finish 17th at the start of FM21 - even the best Football Manager out there might find it a challenge bringing Twente back to glory in one season. 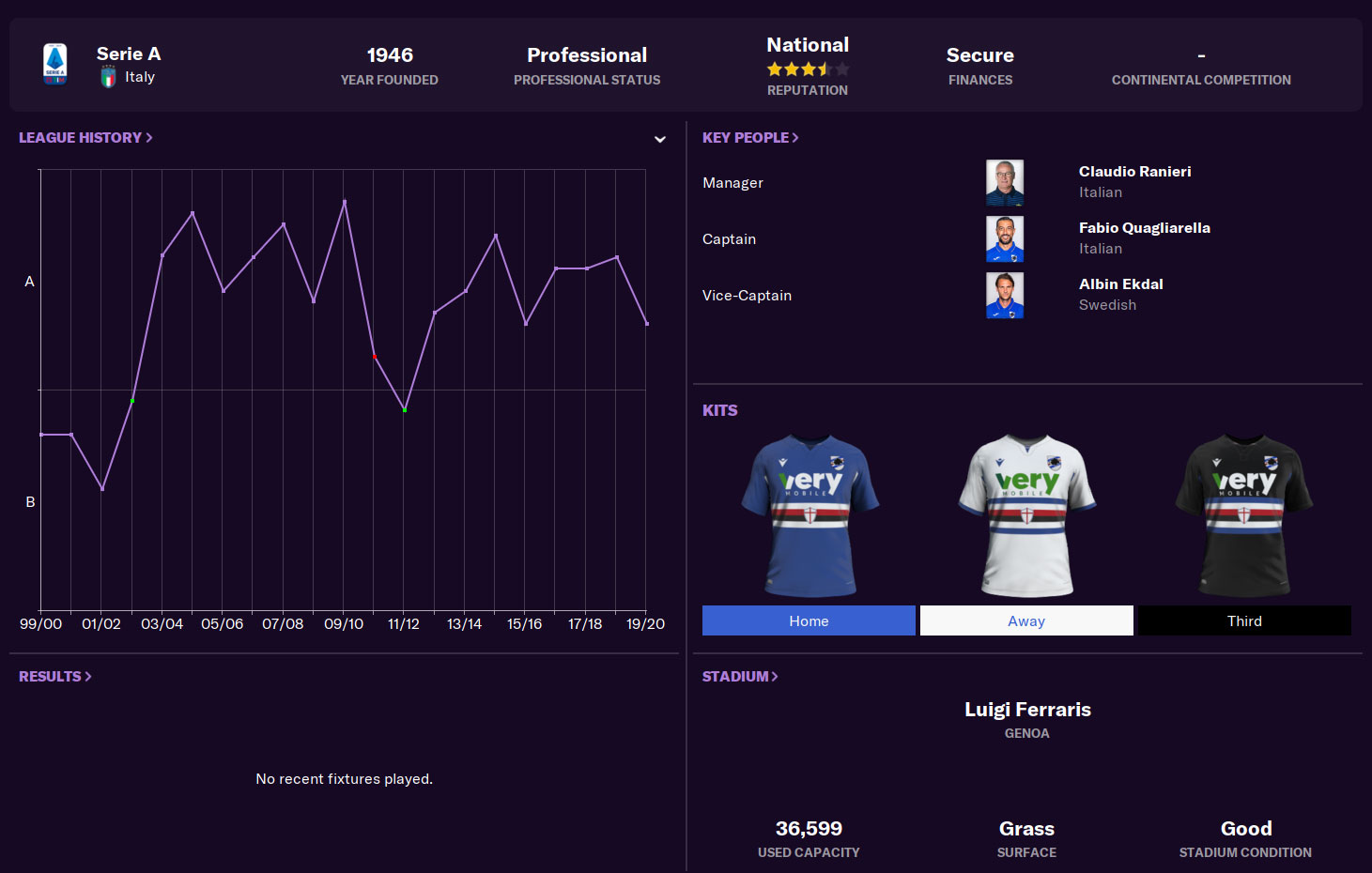 Sampdoria are a Football Manager dream. Steeped in history, nostalgia, underachieving and a host of iconic players over the past 30 years (Lombardo, Vialli, Pagliuca, Mancini, Icardi, Platt, Cassano to name a few) - the club have always shown potential to compete with the giants of Serie A however more often than not have ended up selling their best players to the likes of Juventus and Milan, thus preventing them from ever maintaining consistent form and competing at the higher levels of Italian football.

I say more often than not - the exception to this came in the 1990/1991 season, a time when Italian football was dominated by both Milan teams and somehow Sampdoria came out of nowehere to win their first ever scudetto. For context on how remarkable this achievement was - this was when AC Milan boasted the class of Dutch trio Frank Rijkaard, Ruud Gullit and Marco van Basten, while on the other side of Milan the German trio of Andreas Brehme, Lothar Matthaus and Jurgen Klinsmann were in the prime of their careers at Inter having just won the World Cup the year before. Sampdoria weren’t bothered though - 19 goals from Gianluca Vialli sealed them their only Serie A title and since then they haven’t come close to ever winning a second. 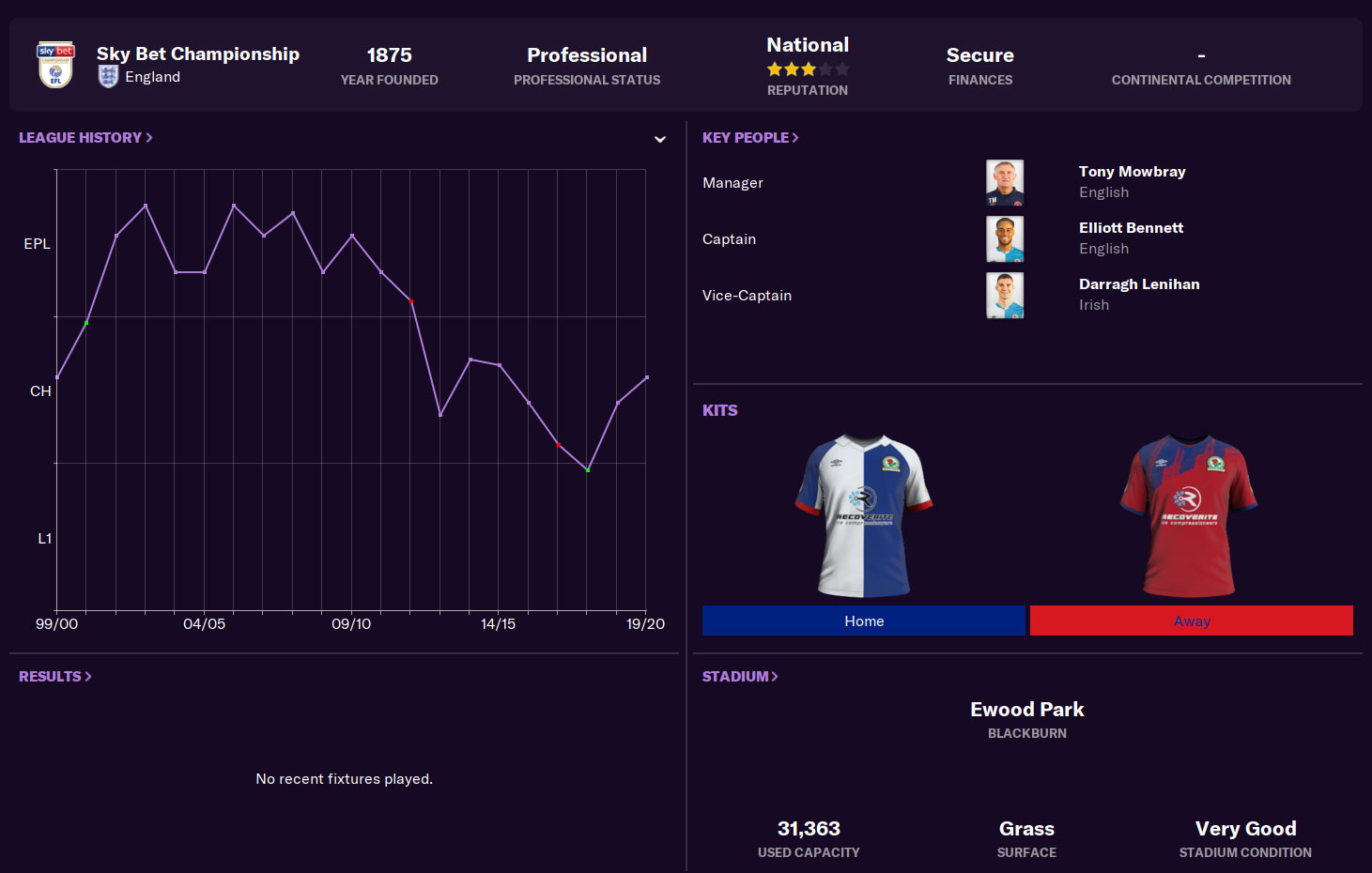 Shearer and Sutton, name a more iconic 90’s Premier League duo. The 1994-1995 season saw cash-rich (at the time) Blackburn Rovers win their first Premier League title in 81 years, a feat made even more impressive by the fact that this was smack back in the middle of Alex Ferguson’s dominant Man United era.  Fueled by Owner Jack Walker’s millions, Rovers won the league by a single point over second place United, with Manager Kenny Dalglish taking the Manager of the Year award accompanied by Alan Shearer finishing as top scorer with 34 goals. Fans of English football will know that Blackburn have since had a somewhat tumultuous journey ever since, ranging from European football to relegation down to League 1 in 2017, and currently in the Championship Blackburn are well overdue a return to the top flight. FM21 might just provide that opportunity. 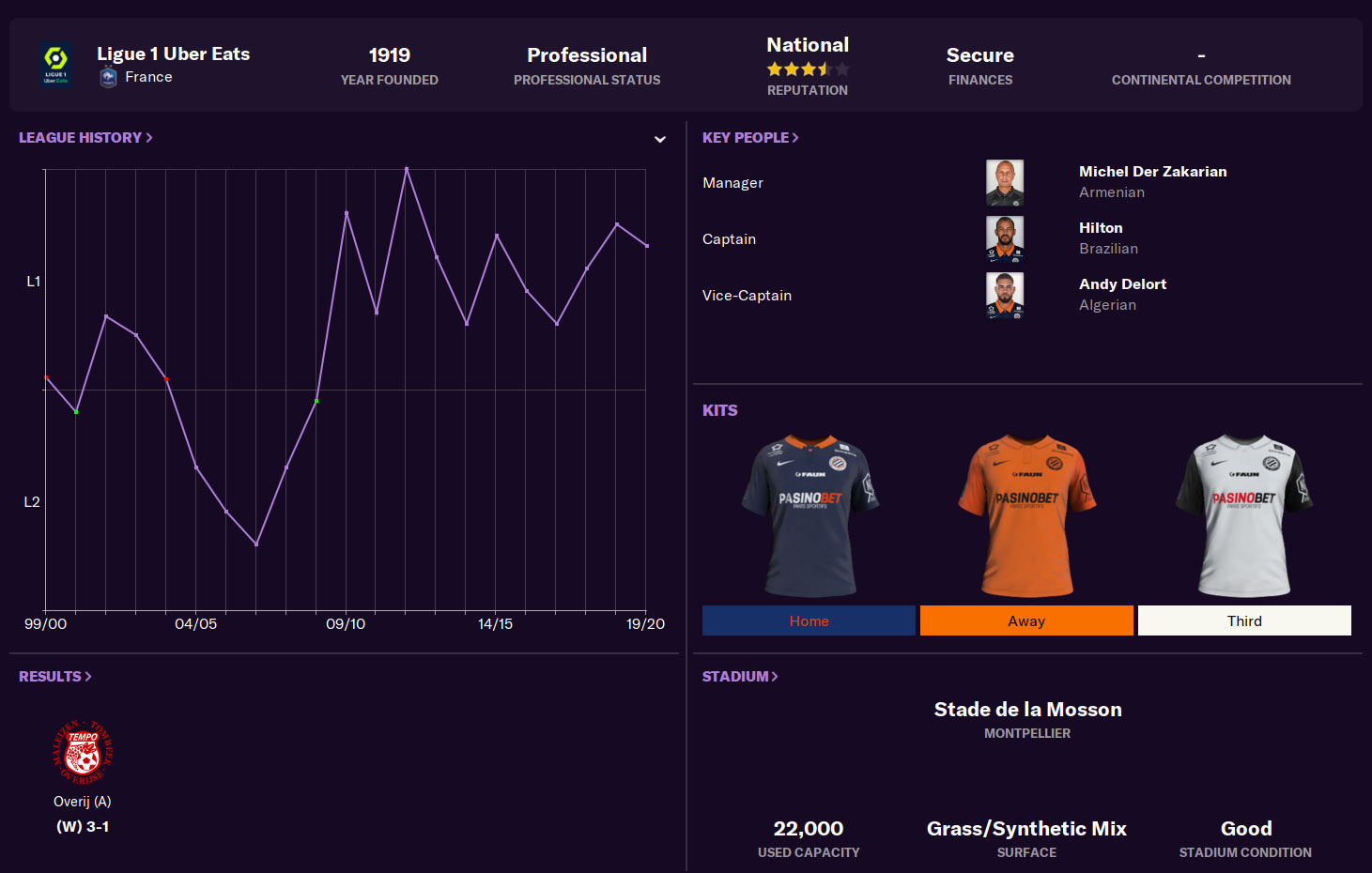 Most people forget that not only have teams other than PSG won the French Ligue 1 during the past 10 years, but also that in the 2011/2012 season Montpellier FC took French football completely by surprise by winning the league title ahead of PSG in second. That season PSG spent €82m strengthening their squad, however it was Montpellier’s record transfer who stole the headlines, scoring 21 goals to help them win the league - that man was €1.7 million signing Oliver Giroud, and the rest as we know is history.

Fast forward and Montpellier have since only managed a series of mid-table finishes, while PSG have moved on to completely dominate French football for the foreseeable…have the days of surprise league challengers come to an end, or do Montpellier still have that taste of success ready to be reignited? 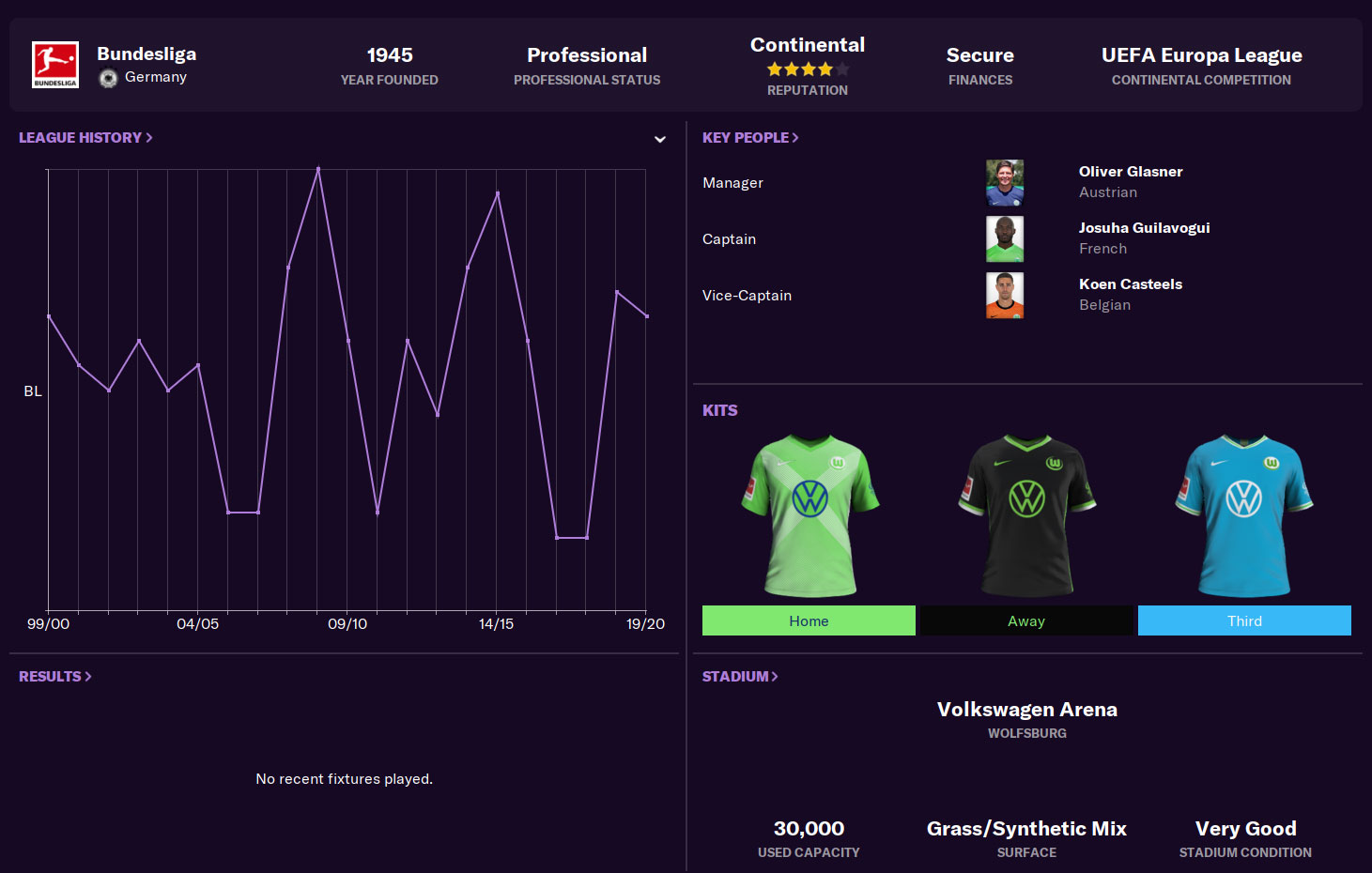 Once upon a time there was life before Bayern in the Bundesliga. In the 2008/2009 season, three things happened: Brazilian Striker Grafite scored 28 league goals; Edin Dzeko scored 26 league goals and Zvjezdan Misimović notched up 20 assists - the fact that all three players were playing for the same team meant that VfL Wolfsburg won their first ever Bundesliga title, finishing two points ahead of Bayern and firmly etablishing Manager Felix Magath’s name in the history books as one of the greatest German Managers ever (let’s not talk about his later spell at Fulham).

Nowadays and similar to Ligue 1 mentioned above - it’s difficult to see anyone other than Bayern winning the league, and even if that happens it’s likely Dortmund will be the ones to do it. Is the future of German footall written? With young talent such as Xaver Schlager, Marin Pongracic and Josip Brekalo coming though to the first team, there may be life in the old wolf yet. 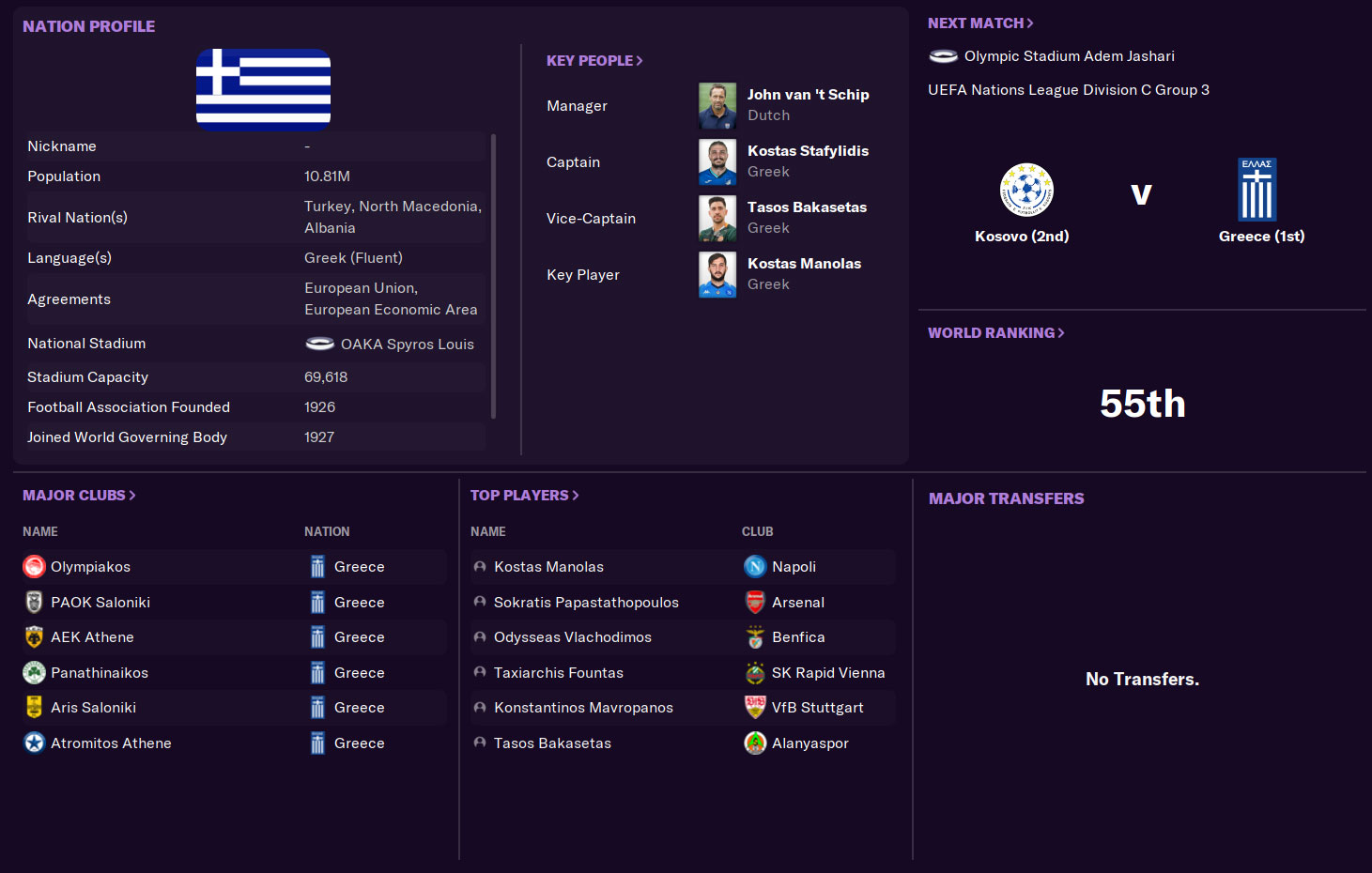 The ultimate underdog. Before 2004, Greece had never won a game at an International competition, and after being drawn in a group with Portugal, Spain and Russia most football enthusiasts that they would face an early exit and soon be on a flight back to Athens. They were wrong.

After beating Portugal and earning a draw against Spain in the group stages, the Greeks went on to defeat France and Czech Republic, setting up a final rematch with hosts Portugal who themselves had beaten England and Holland to make themselves favourites for the clash. Greece Manager Otto Rehhagel had built a rock solid hard working Greece team, difficult to break down and seemingly set up to win all of their games by a single goal…so why should the final be any different? The Portuguese were frustrated for the whole game, and on 57 minutes Greece took their chance through an Angelos Charisteas header which was enough to win them the game and the tournament.

Never has such a feat been experienced or repeated on the international stage - with Greece failing to qualify for Euro 2020, can you make the 20 year anniversary of their epic win one to remember in 2024?

There you have it! Whether you are looking for a short-term save (ideal for the FM21 beta) or a longer term challenge with the goal of turning these one-season wonders into regular title contenders or even champions of their respective leagues - either way it should be both a challenge and an entertaining journey trying to emulate these team’s past glories and bringing good times back to their loyal fanbase.

Thanks to WeStreamFM for allowing us to republish their fantastic article.