This article will explain how to set defensive corners in Football Manager using the set piece creator. We will run through all the basics and explain all the options you have.

While setting defending corners isn’t on every manager's mind when it comes to building tactics. Most people leave them to the default settings and concentrate on other areas of the game. But just like every other setting: there are reasons why you can change the settings and there certainly is value from creating defensive corner routines.

Defending corners isn’t that hard and the default settings will get you some good results at the end of the day. But if you want your team to use the defensive corner to initiate counter attacks it is advised to always change the settings before the season starts. After that you can check on them once or twice a season to see if your player instructions still match with the correct players.

Before we start the article we would like to emphasise that this article will NOT show you the best way to set defensive corners. This article is simply meant to explain the basics on how this system works.

This will take you to the starting screen of the set piece creator. Here you can see the pitch with the standard set of player instructions for defending a corner. On the top you can then select your tactic (if you use more than one tactic), the scenario (defend or attack), the location (left of right) and the routine you want to edit (more on that later). 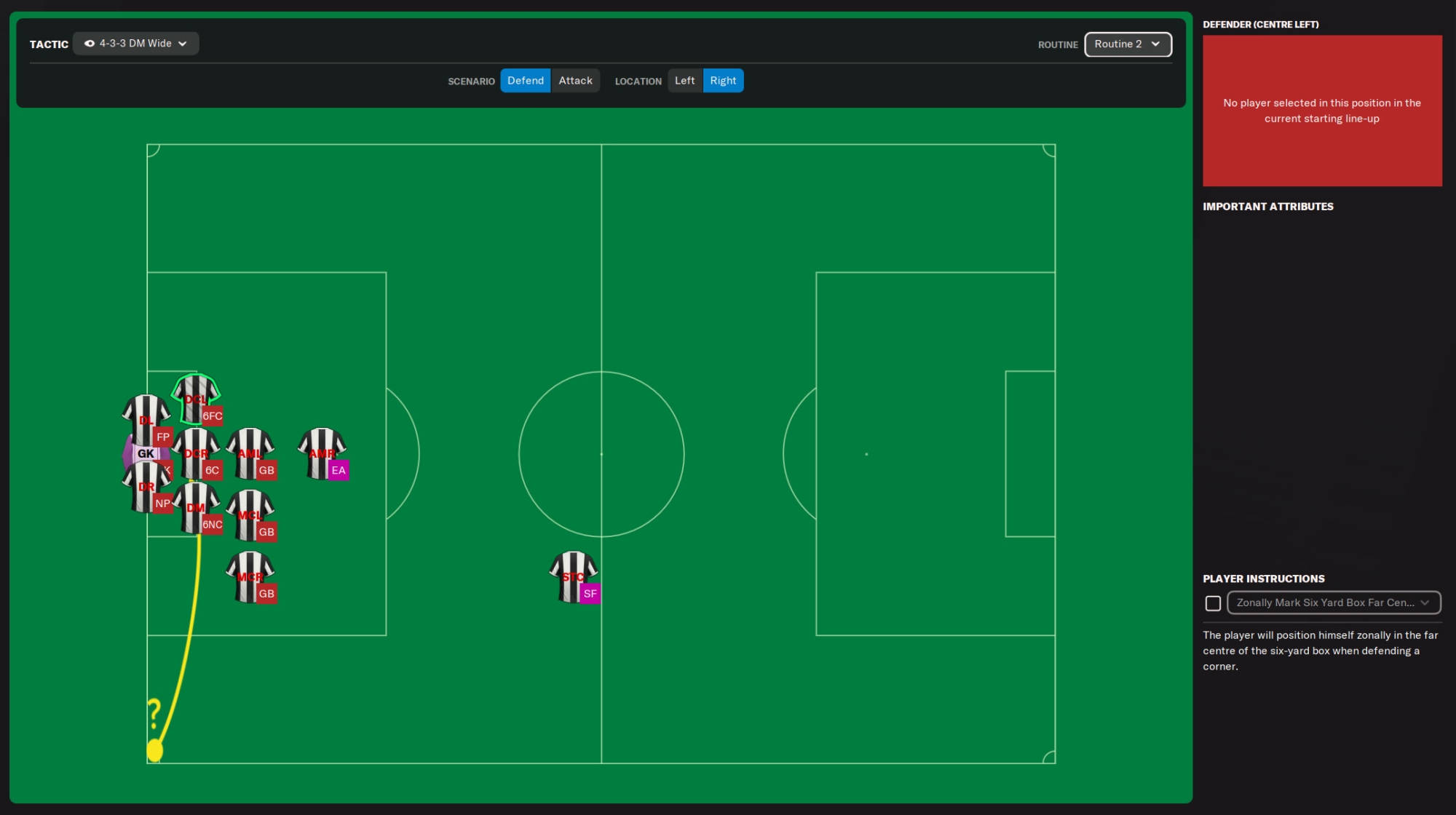 How to change player instructions?

Which player instructions are there?

In total there are 13 different defensive corner instructions you can give a player. We will discuss them all in seperate groups: basic, man marking and zonal. We will also give some pointers in which attributes you should be looking for. 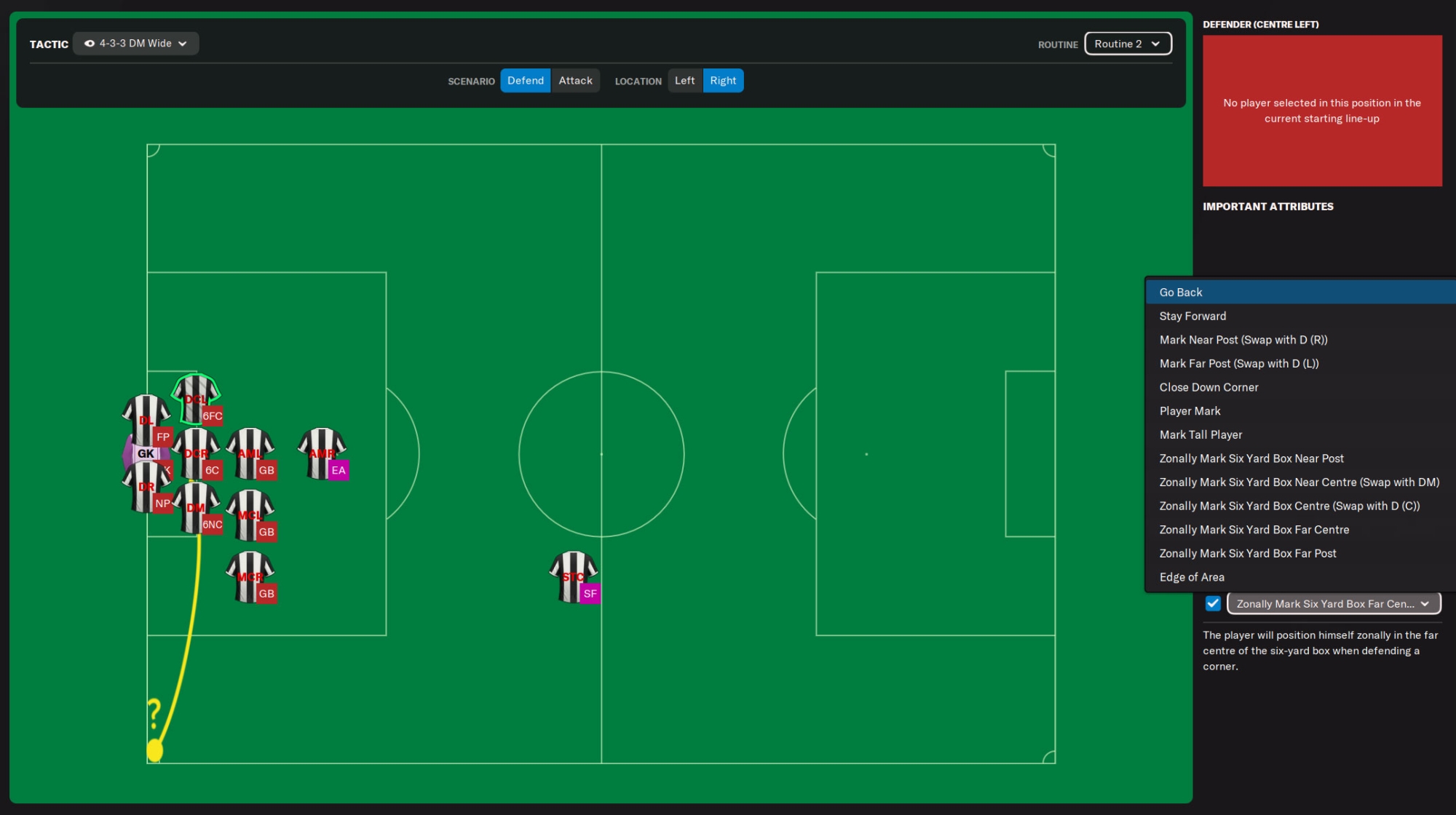 These are some basic instructions for players when defending corners.

Go Back is the most basic setting as this instructs players to place themselves in the penalty area with no further instructions.

Mark near post will instruct a player to stand on the near post. In real life this instruction is given to short players like fullbacks or wingers. These short players aren’t of any use for man marking big players and can be useful covering the posts.

Close down corner will instruct a player to stand as close to the corner taker as possible as he tries to prevent a short corner.

Edge of Area will instruct a player to stand on the edge of the area to cover for possible long range shots. They could also be the first players to receive the ball after you have successfully defended a corner. A good passer or dribbler could be ideal for this instruction.

These are instructions when you want to use a man mark strategy with corners.

Player Mark will instruct a player to man mark an opposition player tightly in the box.

These are instructions when you want to use a zonal mark strategy with corners.

Zonally Mark Six Yard Box Near Post will instruct a player to position himself in the six-yard box zone at the near post.

Zonally Mark Six Yard Box Near Centre will instruct a player to position himself in the six-yard box just off-centre and closer to the corner taker (between the near post and centre).

Zonally Mark Six Yard Box Centre will instruct the player to position himself in the centre of the six-yard box.

Zonally Mark Six Yard Box Far Centre will instruct a player to position himself in the six-yard box just off-centre and further away from the corner taker (between the centre and far post).

Zonally Mark Six Yard Box Far Post will instruct a player to position himself in the six-yard box zone at the far post.

What should I pick: Man or Zonal marking?

There isn’t a better choice when it comes to Man or Zonal marking. You can even try to use both marking strategies at the same time.

Pros for Man Marking are that you instruct your defenders to mark specific opponents closely and you can be sure that each player will be picked up. Cons for this marking strategy could be that either your opponent has taller players than you or that they have better movement attributes than your team, resulting in your markers to lose their opponent.

Pros for Zonal Marking are that with a full zonal strategy you can create a surplus situation with players in the six-yard box. That way space will be tight and the opposition will find it hard to find free players. The Cons are quite obvious as this could result in dangerous players not being picked up if the communication between players isn’t good enough.

Since a couple of versions ago you are able to use ‘Routines’ for your set pieces. This simply means you can have more than one set of instructions for your team and your team will switch between these routines throughout a match. You can create up to three different routines and you can Save, Load or Remove routines from within the set piece creator.

When it comes to defending corners it is not advised to set more than one routine. During a match you won’t be able to switch between the routines and the players will decide on themselves. This could lead to a mismatch with your opponent, increasing the chances of them scoring a goal. 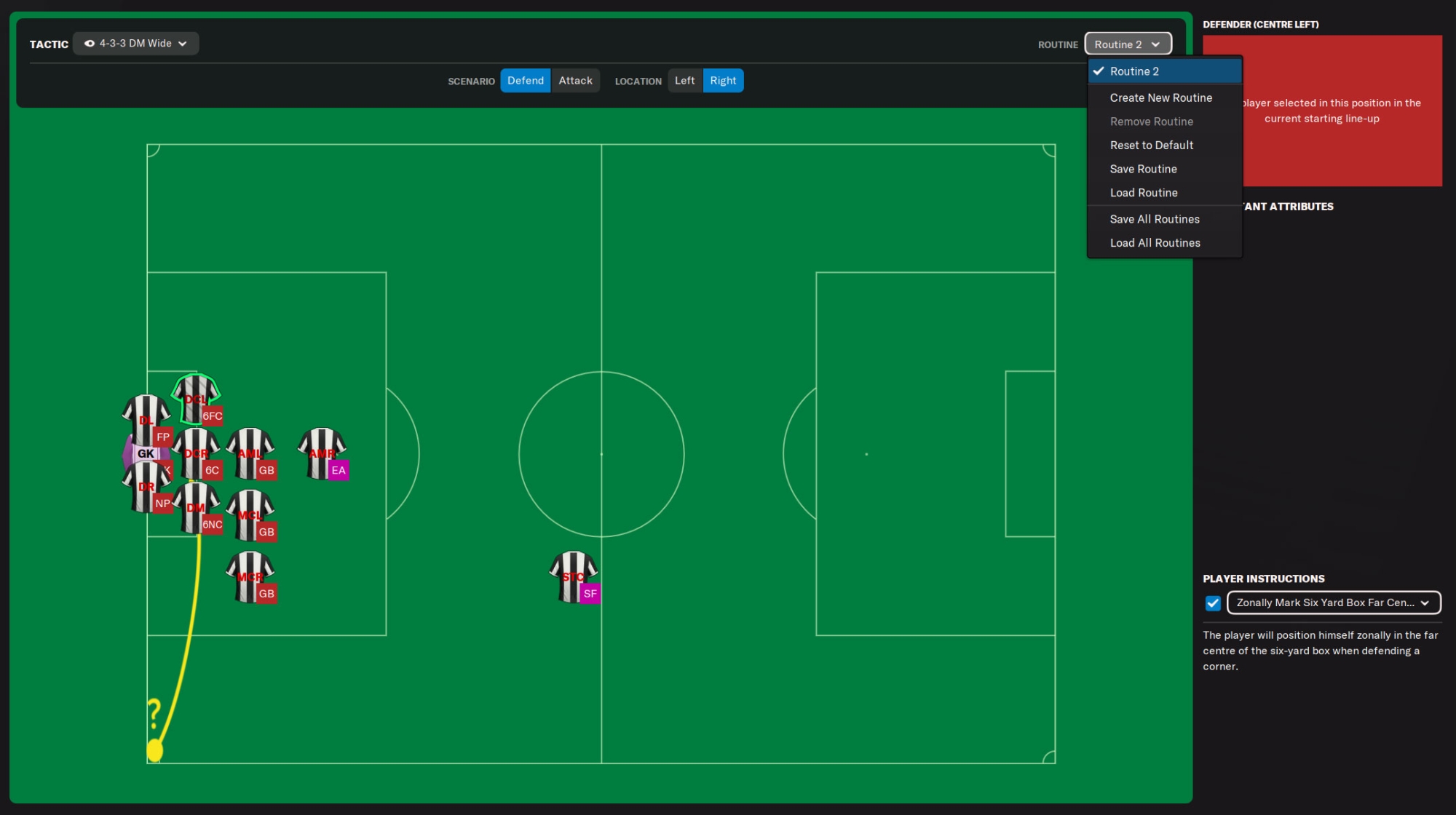 While setting a defensive corner strategy is often overlooked in Football Manager, they can be very effective in two areas: avoid conceding goals and create opportunities for a possible counter attack.

But like we said earlier in the article: the basic settings are fine and by not setting corner instructions you won’t concede a lot more goals. However, you won’t be creating many counter opportunities as well.

So if you want to have the full control of your team and want to try and get these extra attacking opportunities you should really complete the setup for defending corners.

Also read our guide on Attacking corners in Football Manager.