This is a 3-5-2 counter attack tactic created by Mr U Rosler.

A slight tweak to the formation moving the AMC back to a DLP in the DM position. Tweaked player roles and team instructions, not much but enough to get us back to where we were pre-update, if not better.

This result was obtained during 'holiday mode', whist there is as much as a 15 point variance when repeating tests and this result is towards the top of the scale, repeat runs routinely achieved 100 points/100 goal difference. This consistent high return would normally indicate we are onto a winner. 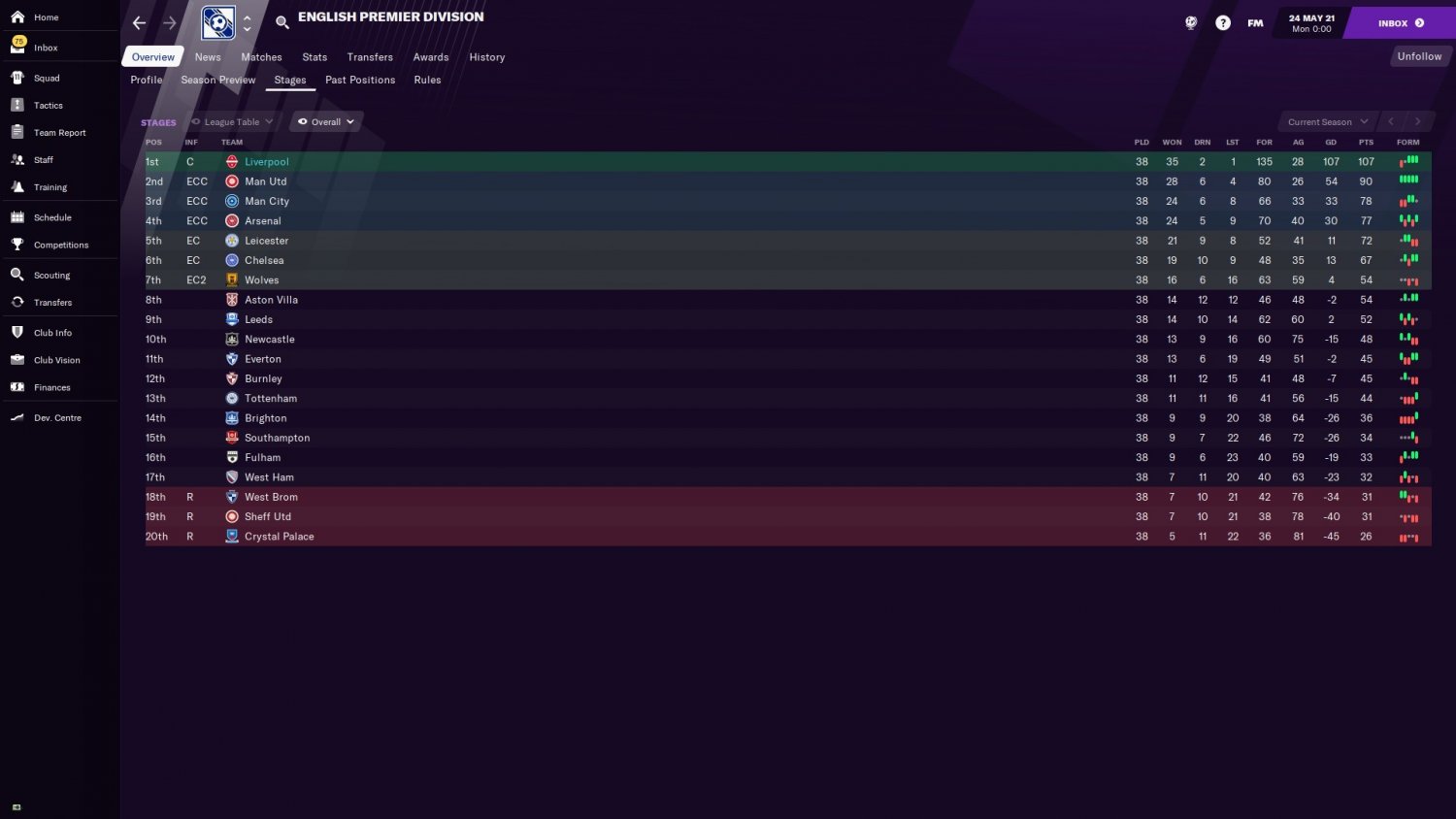 This is my main save so the result was achieved via normal play. Whilst not a very impressive points total, as i'm doing an Academy Challenge this is achieved with original non-league starting squad supplemented by a couple of youngsters, in that context its very good. (we are holding our own in League 1 now with a non-league squad). 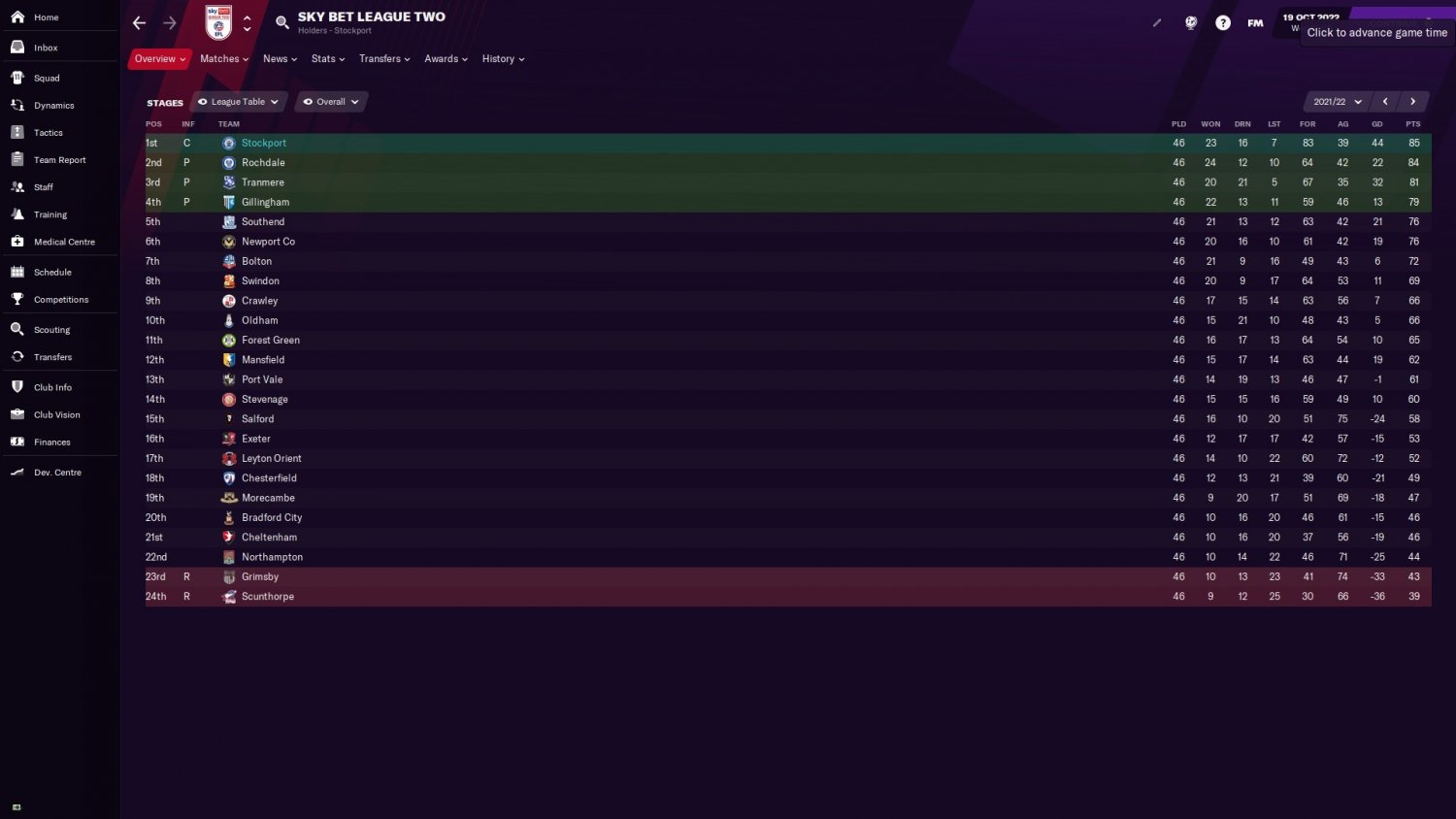 We feel we are now defensively sound to the extent we can absolve our strikers of pretty much all defensive responsibilities outside of closing down the keeper. This gives us 2 out balls at all times making us very dangerous on the Counter attack, often we will have 2 on 3 or 2 on 2 situations during which our agile Strikers have the upper hand versus clumsy central defenders.

With the security of a defensive midfielder and 3 centre backs behind them, our central midfielders have licence to go and cause havoc. The Mezzala role encourages some width in their play which means easy link up with the Wingbacks, often with the Wingbacks cutting inside them creating very unpredictable patterns of play which are difficult to defend against.

The addition of these roles are a god send to someone like me who likes to focus play through the middle and create central overloads, having said that, they do mix up play often staying fairly wide, especially if you don’t play with inverted feet. However, when play is building on one flank, the opposing Wingback will come narrow and can attack the far post for goals and assists.

This role requires a blend of both attacking and defensive qualities underpinned by a good engine.

Responsible for breaking up play as well as instigating attacks, our man is a key cog in the wheel. Assisting greatly in playing out from the back, with space and time on the ball he should have a range of passing options open to him, good vision and passing will see him picking out some longer and potentially very dangerous passes. If we can layer on some good defensive qualities we have the ideal player for this role.

Employing 3 central defenders makes us very strong at set pieces, the right centre back in particular will be on the end of a lot of set pieces, I’d put your best Header in this spot.
Beyond that, nothing out of the ordinary are required, just get the best defenders you can. Good headers are a must, pace is always welcome, a good passer is the icing on the cake.

Again, no surprises here. We can go for traditional shot stoppers, world class distribution is not required. Just ensure they are good at one on one’s and are good in the air.

Its Attacking not Counter Attacking?

Counter attacking, as a mentality has been removed from the game. A counter attack triggers on any mentality when certain conditions are met, for example, when there is only X number of defenders between the ball and our opponents goal. Outside of that, the Attacking mentality encourages more direct passing from the back and a higher tempo in more general attacking play, mimicking the counter attacking style.

You have a high line, I thought counter attacking required a low block?

The high line is employed when we are in possession and attacking ourselves. When out of possession our defensive line drops as appropriate with play. You will see plenty of the ‘low block’, but we are happy to win the ball anywhere.

Why so many attack duties, surely its unbalanced?

We have at least 8 outfield players behind the ball when defending and an explicit reason for keeping 2 players up the pitch. If the Attacking Midfielder on Attack duty did not get back behind the ball, I would have dropped him down to Support duty, but he does defend diligently even on Attack duty which means he is very aggressive in moving forward during transition which is what we want.  The same reasoning applies to the Wingbacks. We have players on attack duty as they still fulfill their defensive responsibilities well but are quick to transition, exactly what we want.

I would employ more support duties on a possession based system.

My DMC & Wingbacks get low ratings.

The ratings system was ruined in 21.2. DM and Wingbacks seem to suffer the most, hopefully it will be fixed soon.

How to install 3-5-2 Counter attack